No Dart service for Battle of Clontarf festival on Sunday

Bus shuttle will be available to visitors to St Anne’s Park in Raheny, says Iarnród Éireann 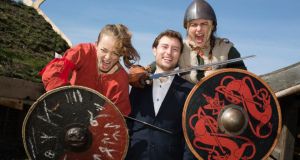 Desmond Burke of Tourism Ireland with Emma Greene (left) and Rebecca Birka at the dress rehearsal in southern Sweden for the Battle of Clontarf re-enactment. Photograph: Tourism Ireland/Martin Lindeborg

Iarnród Éireann has warned there will be no north Dublin Dart services on Sunday, the second day of the Battle of Clontarf Festival in St Anne’s Park, Raheny, which is expected to attract up to 30,000 visitors each day, according to organisers Dublin City Council.

Iarnród Éireann said it had not been told of the re-enactment plans when it scheduled essential works between Connolly station and Malahide for Easter Sunday. Dublin Bus will accept valid rail tickets on scheduled services between closed Dart stations and the city centre on Sunday. Dart services will continue to operate between Greystones and Connolly station.

On Sunday, festival-goers can travel on Dublin Bus routes 29, 31a, 31b, 32 and 130, with an additional festival shuttle bus every 15 minutes on the 31 route from Eden Quay (between 10am-2pm) and from Abbey Street after 2pm. Normal fares will apply.

Tonight will remain dry with just a few spots of drizzle along western coasts, while tomorrow will be a largely dry day with the possibility of very light showers along parts of the west coast. Highest temperatures will range from 11-14 degrees.

Easter Sunday will likely see outbreaks of rain moving from the west into parts of Leinster, while Monday will have a mix of patchy rain.

Dublin Airport is set to be particularly busy with more than a quarter of a million passengers expected to travel , a 13 percent increase compared to last Easter. Airport authority spokeswoman Siobhán O’Donnell said the increase was “due in part to the 14 new services which started recently, as well as extra capacity”.

In Dublin, the the Half Million Half Marathon takes place in the Phoenix Park today, with the race starting at 10am.