“Cork was the first in Ireland to book Chic at a concert. Tonight we came back and it was spectacular” 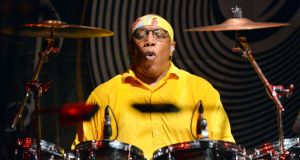 The co-founder of seminal disco band Chic, Nile Rodgers, has paid tribute to fans in Cork for being among the first in Europe to champion the group in the 1970s

Rodgers received a rapturous reception from concert-goers at Cork Opera House on Saturday night as one of the headline Guinness Cork Jazz Festival acts.

Performing with his band Chic, the 61-year-old American played Good Times and Le Freak as well as songs he produced for David Bowie, Madonna and INXS, among others.

Rodgers said he was delighted to return to Leeside having visited the city on several occasions previously.

“Cork was the first in Ireland to book Chic at a concert. Tonight we came back and it was spectacular.”

The festival, which concludes today, has showcased artists such as saxophonist Courtney Pine and the Mingus Big Band.

Primal Scream are set to play at the opera house this evening in one of the final gigs of the festival.

Acts involved in the Music Xtra trail over the weekend included the Hot 8 Brass Band, Glen Hansard and the James Taylor Quartet.

On the streets of the city there was a colourful array of performers, from swing bands to a brass band from Yorkshire and a nine-piece marching band from Berlin.