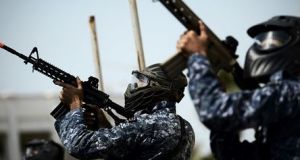 An international human rights organisation has called for a Northern Ireland company to stop training security forces in Bahrain amid concerns about torture.

Reprieve wants NI-CO (Northern Ireland Co-operation Overseas), which is owned by Invest NI, to suspend its contract because police and prison officers in the Middle Eastern state systematically abuse government opponents, it says.

There is no suggestion anyone from NI-CO is complicit in the alleged torture.

But a report published by Reprieve said: “Ministers in Northern Ireland have urgent questions to answer about the company’s activities and the lack of oversight Stormont exercises over NI-CO.

“The company has trained forces who are accused of torturing people to confess to charges that carry the death penalty, as well as supporting institutions that have failed to investigate the abuse.”

Belfast-based NI-CO has worked with Bahrain’s police, prison guards and ombudsman’s office for years and was awarded a £900,000 contract by the UK Foreign Office to promote human rights reform in Bahrain in 2015, Reprieve said.

The report, entitled Belfast To Bahrain: The Torture Trail, highlights the case of one death row inmate, Mohamed Ramadan, a former policeman and father of three young children who was tortured into making a false confession.

The paper states: “It trains Bahrain’s Interior Ministry Ombudsman, a watchdog which knowingly refused for more than two years to investigate complaints regarding the torture of Mohamed Ramadan - a father-of-three on death row who was tortured into making a false confession.

“After being caught out for ignoring these torture complaints, the Ombudsman said it would begin an investigation. Instead, it has bullied and intimidated Mr Ramadan’s wife and flouted international minimum standards for torture inquiries at every turn.

“NI-CO is embedded in Bahrain’s internal security apparatus: a victim could be abused by NI-CO trained police, tortured in prison by NI-CO trained guards, and then have their torture allegation investigated and dismissed by the NI-CO trained ombudsman.”

‘Afraid to speak out’

She said: “The UK Foreign Office is financing a whitewash of Mohammed Ramadan’s torture and coerced confession, leaving an innocent man languishing on death row and his family afraid to speak out.

“UK money is complicit in covering up torture in Bahrain. The Foreign Office needs to come clean about what it has paid NI-CO to do with a repressive regime like Bahrain.”

Meanwhile, the report also highlighted concerns about NI-CO’s work in other repressive regimes such as Egypt, where Dublin teenager Ibrahim Halawa has been held in prison since taking part in a protest in 2013.

In a statement, Invest NI said: “NI-CO is classified as a public body and, whilst it is wholly owned subsidiary of Invest NI, for policy and administrative purposes, the company has its own chief executive and board.

“NI-CO can enter into contracts and other arrangements as it sees fit, under the guidance and responsibility of the chief executive and board. The vast majority of these contracts are awarded by the EU Commission and Foreign Commonwealth Office (FCO).

“Invest NI does not have sight of project-specific detail, nor would it be required to have it.

“However, it is aware of NI-CO’s work in Bahrain in partnership with the FCO as part of the UK government’s support to the government of Bahrain’s reform programme.

“It is Invest NI’s view that it is appropriate for NI-CO to work to support this reform, sharing learnings on how Northern Ireland has dealt with changing attitudes, culture and behaviour.”

No one from NI-CO was immediately available for comment.