No injuries as The Derragarra Inn in Butlersbridge burns down overnight 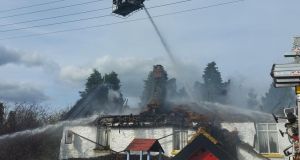 A fire has destroyed a restaurant in Butlersbridge, Co Cavan.

Fire crews from Belturbet and Killashandra worked late into the night on Saturday to bring the fire at the Derragarra Inn under control.

Gardaí cordoned off the area as fire crews dealt with the fire for several hours.

There were no injuries. The cause of the fire is being investigated.

Residents and passers-by, including Fianna Fáil Councillor John Paul Feely, looked on in shock as flames ripped through the famous building’s thatched roof.

“I drove past as the firefighters were dampening down the building, it was shocking,” he told The Irish Times.

“The Derrygarra has been a Cavan institution and the new management were making huge efforts to re-establish it and get it back on the culinary map. This is devastating for the owner, staff and community,” he said.

“I was only there the other day and had a great time. As the owner of a long-established business in Irvinestown, Fermanagh, it was nice to spend some time in the Derrygarra again. I had heard a lot about it,” he said.

“I spoke to the owner about the business and he was telling me how well everything was going. I want to send my thoughts and the thoughts of the hospitality industry in neighbouring Fermanagh to him and all his staff at this sad time.”