Newgrange revelations do not deter solstice-watchers

A cloudy start to the day results in merely a fleeting moment of winter solstice sunshine in Newgrange's ancient chamber. Video: Alan Betson 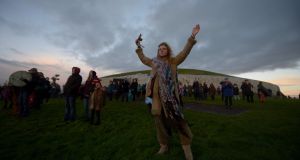 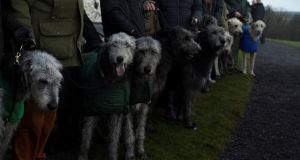 News that elements of Newgrange, the late Stone Age monument in Co Meath, may actually be younger than the original Disneyland, which was founded in a suburb of Los Angeles in 1955, did not upset the solstice-watchers who gathered at the site to greet the mid-winter sun.

“If they’re saying the roof box is only 50-years-old, that makes it younger than me,” said a marginally Druidic-looking man with a cloak-like garment tossed over his shoulder.

He laughed and smiled at his friends, most of whom had faces tensed against the chill breeze.

“It’s a CIA hoax,” he shouted, before bowing, pleased at the reaction he’d gotten.

It was cold, but not that cold; there was sporadic rain and heavy cloud, but the beating of the drums remained steady.

There had been a heavy downpour at 6.40am. But Newgrange pilgrims are tough, and impervious to theories.

Shadowy figures moved in small groups towards the monument.

Most of them just wanted the winter to end, or at least begin to end.

“Never believe what you read in newspapers,” came their communal agreement.

Chanting began to soar into a chorus, making a sound resembling a hum.

The darkness was fading as daylight took over. But daylight is not the same as the symbolic beam that defeats winter.

Smaller shapes emerged out of the night, loping along on four legs.

Their arrival was greeted with cheers, as close on 20 Irish wolfhounds, in all colours, ranging from little four-month-old Tara to her giant sire, the canine version of Liam Neeson, introduced an element of wonder, as well as a hint of the past. 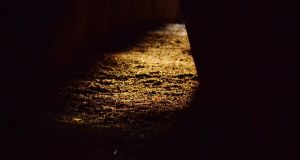 The dogs were calm, stately, not a bark between them. They seemed aware that they were gathered at a ceremonial site at which their ancestors had once presided.

Gardaí stood in happy groups, overseeing the scene like proud parents at a schools’ rugby final.

The dogs were indifferent to the theories. Most of the humans were as well.

“More infighting between archaeologists. Speculation. So what? No one really knows what happened.

“The main thing is that we’re here because it’s here,” one attendee said, glaring at me with a stern expression.

She gave the impression she thought I had invented the story to spoil the celebration.

“Blame it on Donald Trump, I bet he’s behind it.”

This proved an inspired allegation. It broke the tension and two better-than-average mimics ran through routines based on Trump’s greatest gaffs, including his dismissal of climate change as a conspiracy created by the Chinese.

Meanwhile, the sky was brightening, the rain was only a drizzle. A large circle had formed in which people were holding hands.

One of the few children in attendance thought it was funny, seeing grown-ups about to play.

Solo adults were hopping on the spot. They weren’t playing though; they were only being boring, attempting to stay warm.

Yet there was a woman who danced about gracefully, despite her heavy boots and overcoat with sleeves so long they covered her hands.

More cameras and mobile phones were focused on the dogs than on the horizon.

Pity the chosen ones inside the mound, it was more fun outside.

The sun dance seemed to be very like the rain dance you hear about in movies on the Wild West.

Spirits were high; even though conditions were dull, chilly and damp, the sun would shine, if only for an instant. We all knew it would.

Then there it was, a fuzzy ball of yellow fighting to break through the clouds.

The dogs watched on as solemn as a row of judges; they were waiting.

By 9.24am, the shy, determined sun did make a bold push through the band of grey.

The watchers inside the great tomb sighed as a stain of gold made it almost halfway up the passage.Outside, the assembly cheered.

The dogs moved off, as if they, not their humans, had decided it was time to go.

No, it wasn’t a morning of sharp gold on a frosted landscape, but the sun’s fleeting appearance after the longest night was sufficiently eloquent for the eager watchers of nature’s dramatic cycle.

Light has begun its slow return.