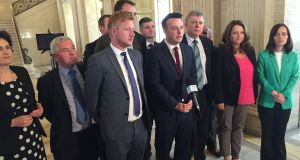 SDLP leader Colum Eastwood flanked by party colleagues as he addresses the media in Stormont after the Executive was formed. Photograph: David Young/PA Wire

The new Northern Executive looks and feels different. It looks different because it has seven new Ministers if you include the two junior posts.

It feels different because unlike the last Executive it is shorn of Ulster Unionist, SDLP and Alliance ministers. This is just short of two-party DUP-Sinn Féin rule.

The UUP and SDLP decided to go into opposition while Alliance shunned the offer from Arlene Foster and Martin McGuinness of the sensitive justice portfolio which leader David Ford had held since 2010.

Ford and the UUP and SDLP leaders, Mike Nesbitt and Colum Eastwood, for good or ill have taken their decisions, and must now make the most of trying to create the impression of an alternative Northern Executive in waiting.

Since 1999, apart from periods of suspension, it has been four- or five-party powersharing government at Stormont with the UUP and SDLP, as their fortunes dropped, losing more and more power in the Executive.

Nesbitt and Eastwood believe opposition is the best option to restore that influence. But over the next five years they will have time to reflect on Mary Harney’s dictum that your worst day in government is better than your best day in opposition.

Privately, Foster and McGuinness must be cock-a- hoop that the UUP, the SDLP and Alliance are out of the equation. Politics is about power and now virtually all of it is in the hands of the DUP and Sinn Féin. Apart from Independent unionist Claire Sugden, taking on justice, there is no one else in the Executive to keep them right.

Otherwise the challenge is for the DUP and Sinn Féin to run an Executive together and not to become bogged down over ideological and constitutional matters and interdepartmental rivalries.

There will be many challenges in the next five years. But the DUP and Sinn Féin and the British and Irish governments should be happy. After three years of stalled and often mean-spirited government this Executive is launched and sailing with a bit of a wind behind it.