Attorney General concerns centred on how distance could be enforced 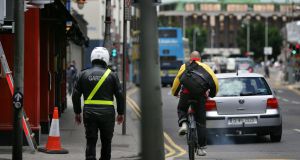 A proposed new law that would have set a minimum passing distance for drivers overtaking cyclists has been abandoned after the Attorney General raised concerns, Minister for Transport Shane Ross has confirmed.

The proposal, contained within the Road Traffic (Minimum Passing Distance of Cyclists) Bill 2017, would have made it an offence to pass a cyclist closer than 1m on roads with a speed limit under 50km/h and within 1.5m on roads with a limit of 50km/h or higher.

Mr Ross said it had proved exceptionally difficult to draft legislation on a minimum passing distance that was constitutional and that could be enforced, and as a result the Bill would not proceed.

It is understood the Attorney General’s concerns centred on how the 1m and 1.5m distance could be measured for enforcement purposes.

“So what we are doing now is drafting a statutory instrument which will make dangerous overtaking, specifically of a cyclist, an offence.”

This new law will not specify a minimum passing distance.

Mr Ross said he believed this alternative would have largely the same effect and hoped this law would be in place by April this year.

Mr Ross told The Irish Times he had not decided whether the penalties for dangerous overtaking of a cyclist would be the same as those proposed for the minimum passing distance Bill, which were three penalty points and an €80 fine.

Mr Ross also said he hoped the roll-out of more cycle lanes would give cyclists more protection and help reduce the “hostility” between cyclists and drivers.

He said both cyclists and drivers should obey the law, particularly at junctions.

The new law is a response to the number of collisions involving cyclists and motor vehicles that result in serious injuries or death. Last year, nine cyclists were killed on Irish roads, down from 14 in 2017.

However, Dr Mike McKillen of the advocacy group cyclist.ie questioned the merit of any new law that did not contain a specified passing distance.

“I fail to see how specifically creating this new offence of ‘dangerous overtaking of a cyclist’ is going to improve on that.”

Dr McKillen said Irish drivers were so litigious it was almost impossible to introduce any road safety measure. “They resent change, whether in terms of speeding or drink-driving penalties or anything else. Our drivers will challenge anything to prevent change.”

Recommending against the law, it suggested instead creating an education and awareness campaign based around an advisory minimum passing distance of 1m on roads with a speed limit under 50km/h and within 1.5m on roads with a limit of 50km/h or higher.

The RSA said these guidelines should also be included in the Driver Theory Test and the Rules of the Road to inform drivers of the necessity for safe passing distances for cyclists.