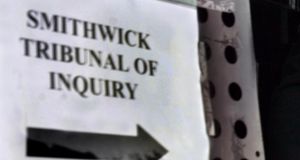 The Smithwick tribunal found on the balance of probability that there was collusion between the Garda and IRA in the killing of Harry Breen and Bob Buchanan in March 1989.

New allegations that rogue gardaí and other State employees colluded with the IRA throughout the Troubles, even helping to prevent the entire army council from being arrested, should be subjected to a formal inquiry, it has been claimed.

Northern solicitor John McBurney has called on the Government to open a formal investigation into the new allegations. The allegations are made in a book Southside Provisional: From Freedom Fighter to the Four Courts by Dublin solicitor Kieran Conway, published this week.

In the book Mr Conway claims he is a former IRA head of intelligence and has knowledge of IRA collusion with gardaí and high ranking public figures.

The Smithwick tribunal found on the balance of probability that there was collusion between the Garda and IRA in the killing of Mr Breen and his colleague superintendent Bob Buchanan in March 1989.

Mr McBurney has since been examining 13 other killings in the Dundalk Border area between 1985 and 1981. The killings included Northern Irish high court judge Lord Justice Gibson and his wife Cecily, and the Hanna family who were killed in an apparent case of mistaken identity, among others.

Mr Conway also alleges in the book that members of the Dublin establishment including a top banker, stockbroker, a leading journalist and several mainstream politicians aided the Provisionals in their armed campaign.

Elite figures in Irish society ferried IRA weapons and hid wanted activists in houses in affluent areas of Dublin, according to the book.

Calling for a new inquiry to be based on the material in the book, Mr McBurney said he wanted to know what the Taoiseach, and the Garda Commissioner were going to do about the claims.

Mr McBurney called on the Garda Commissioner “to investigate fully the revelations contained in Mr Conway’s book and the various matters to which he refers in the interviews”.

Coronavirus: Ireland’s infection peak may have passed, toll could hit 400 by May, report forecasts