Glandore Centre at Cork University Hospital will cater for 2,000 cancer patients a year 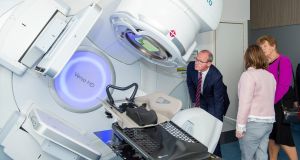 A new €40 million cancer treatment centre in Cork will provide a comprehensive range of services in advance of an anticipated 50 per cent increase in the disease by 2045, Tánaiste Simon Coveney has said.

Mr Coveney said the new Glandore Centre at Cork University Hospital is a vital part of infrastructure in the Government’s National Plan for Radiation Oncology, which was designed to deal with an anticipated increase in cancer as the population increases and ages.

“While radiation oncology services are currently provided at CUH, we can now be assured the additional capacity provided by this new facility will go a long way towards meeting current and future demand in the light of the projected increases in incidence,” he said.

“SGRT speeds up and improves the accuracy of treatment and reduces the need for immobilisation,” said Mr McNamara, as he paid tribute to the voluntary organisation, Aid Cancer Treatment which has provided €800,000 towards the cost of SGRT.

Mr McNamara said the centre will provide treatment for 2,000 cancer patients from all over Munster each year and the provision of new linear accelerators will reduce treatment times from 12 to 1 5 minutes to just 2.5 minutes.

He said that the new centre, built within budget and on time by BAM, will have 120 staff comprising some seven radiation oncologists, 48 radiation therapists, 28 people involved in medical physics, 12 nurses and 16 clerical and support staff.

Mr McNamara said a new collaborative relationship with one of the world’s leading cancer treatment and research centres, the Christie in Manchester, will give patients at the Glandore access to participating in clinical trials for new treatments.

“Only 3 per cent of all Irish cancer patients participated in a clinical trial … the Christie is currently the location for over 650 clinical trials and the new collaborative relationship makes available a major resource to medical staff and patients at the Glandore Centre.”

However, the official opening of the centre was not without controversy with the Irish Hospital Consultants Association saying that cancer services across Munster are being affected by a consultant recruitment and retention crisis at CUH.

ICHA president Dr Donal O’Hanlon said four of the seven permanent radiation oncology posts at CUH are either vacant or filled on a temporary basis, while one of the five medical oncology posts at the hospital is also vacant.

“The Radiology Department has only about 80 per cent of its requirement of 18 posts. There are vacancies in neuroradiology and breast radiology and there is a need to approve a further two permanent posts taking account of the workload,” said Dr O’Hanlon.

“As a result of these significant deficits, cancer services at the hospital are currently restricted. The provision of full 24/7 inpatient and outpatient radiology services has been adversely affected.

“There are simply not enough radiologists to maintain the service, with restrictions on outpatient CT and ultrasound imagery,” he said, adding that these and other vacancies, often for lengthy periods, are undermining the delivery of cancer care in CUH.

But Mr McNamara said that six of the seven radiation oncologist positions will be filled before the Glandore Centre starts treating patients in mid-October while a seventh post is being kept open to create a position of Professor of Radiation Oncology with UCC.

The opening will be on a phased basis because it will take several months to commission the linear accelerators. However, he said the new equipment will not require the same downtime for servicing as older machinery so there should be a reduction in waiting times, he said.

“It will be a much better service, a much more responsive service for patients,” said Mr McNamara, adding he new centre had borrowed from the best international practice in terms of design to create a more comfortable, less technical environment for treatment.