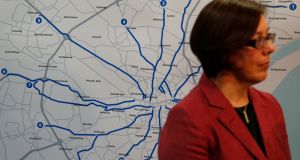 The National Transport Authority’s chief executive, Anne Graham, said some decisions may be ‘difficult’, but they were necessary for ‘fast, reliable, punctual and convenient’ public transport. Photograph: Nick Bradshaw for The Irish Times

Nearly 350 homes in north and west Dublin will lose part of their front gardens to clear the way for the first of four high-speed BusConnects bus corridors in the capital, the National Transport Authority (NTA) has said.

Properties affected will lose up to two metres of gardens – although they will get up to €25,000 compensation: “Some people will get more, some people may get less,” said Hugh Creegan, NTA deputy chief executive.

Sixteen high-speed corridors are to be created under the €2 billion BusConnects project, which promises quicker journeys, though many passengers will have to change buses en route.

The first four corridors are from Clongriffin, Swords, Blanchardstown and Lucan to the city centre. Some 120 homes will be affected on the Clongriffin corridor; 110 from Swords; and 100 from Blanchardstown.

However, just 15 homes will lose part of their gardens on the corridor from Lucan. A NTA public consultation run regarding these four corridors will continue until mid-February.

Some 230 car park spaces will be lost, along with 514 trees. A further 1,000 property owners are expected to learn in January and February on how they will be affected by the other 12 routes.

This element of the BusConnects plan is about upgrading 230km of bus lanes and 200km of segregated cycle lanes.

On the Clongriffin corridor, those who may lose part of their front gardens are between Copeland Avenue and Marino Avenue, Charlemont Road and Crescent Place and Brian Road and St Aidan’s Park.

On the Swords corridor, properties at Seven Oaks are affected, along with homes between Griffith Avenue and Home Farm Road.

There will be a “limited land take” at Whitehall Holy Child (car park only), Whitehall GAA (boundary walls), Plunket College and land between Milmount Avenue and Botanic Avenue.

Properties located on the Swords Road, between Coolock Lane and Omni Park shopping centre entrance, may also be affected.

On the Blanchardstown corridor, properties between Ashtown Grove and Kinvara Avenue; between Kinvara Avenue/Baggot Road; and between Nephin Road and Ratoath Road are affected.

On the Lucan corridor, properties affected are along the Lucan Road towards Mount Andrew Court.

Mr Creegan said properties on these corridors would see losses to their gardens of between one and two metres, though homes on other corridor routes “are affected slightly more”.

The NTA said the project was subject to approval from An Bord Pleanála and construction of new lanes would not begin until 2021. They said public information meetings would be held and community forums established.

Change is needed “now more than ever”, said NTA’s chief executive, Anne Graham. Some decisions may be “difficult”, she accepted, but they were necessary for “fast, reliable, punctual and convenient” public transport.

Dublin’s population would grow by a quarter by 2040, she said: “The level of congestion will increase and people’s quality of life will be eroded unless we take the appropriate action now.”

The next list of affected home-owners will be told in mid-January. The last batch will be notified in mid-February, in order to “appropriately manage levels of engagement”.

The NTA received almost 30,000 submissions about the revamped bus routes before last September’s deadline. A revised route map is due, followed by more consultation. The new network is expected to start in early 2020.

The NTA said the network redesign could be implemented using the current road network with “some upgrades to infrastructure at key interchange locations” and in advance of the core bus corridor project.