Mediterranean deployment likely to pause before recommencing in spring - Coveney 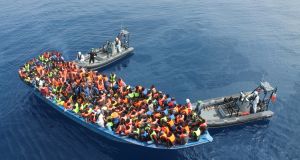 Small craft attached to Naval Service vessel LÉ Eithne assisting with the rescue of migrants in the Mediterranean in June 2015. The mission is to continue in 2016. File photograph: Irish Naval Service

The Naval Service mission in the Mediterranean which has rescued almost 8,000 migrants is set to continue next year, Minister for Defence Simon Coveney has said.

While the deployment would likely pause in December and January, it would recommence in early spring, he added.

Just under 500 are currently abroad serving with 16 international missions.

The Minister said that while the work in the Mediterranean was “valuable”, the Naval Service was not big enough to maintain patrols for illegal fishing in Irish waters to the same extent as normal while a ship was deployed off the coast of Italy.

“I make no apologies for that,” he said at the annual conference in Galway of PDforra, the group representing soldiers, air crew and sailors. “We have prioritised saving lives in the Mediterranean over fisheries protection duties, but we can’t maintain that forever.”

If the Naval Service was to have a permanent presence overseas, the number of ships in the current eight-vessel fleet would need to be reviewed.

PDforra wants its members in the Mediterranean to be paid the full overseas tax-free allowance of up to €80 per day rather than the €50 that has been agreed.

The association has pointed out the ships the sailors are deployed on are armed and the personnel have also been required to produce their personal firearms.

Mr Coveney said naval personnel on fisheries protection duties off the coast of Ireland were also on armed ships and had personal weapons, but their daily allowance was €50 and it was taxed.

He had already made a special case on allowances for those in the Mediterranean by not taxing them.

“There is a difference between somebody who is operating in an armoured vehicle in a war zone with missiles flying over their head and somebody who is on a peace support humanitarian mission somewhere in the world,” he said.

However, the Defence Forces conciliation and arbitration process was considering a PDforra application for the higher allowances, which would result in an additional €250,000 untaxed being paid to the naval personnel.

If the process found the higher allowance should be paid, Mr Coveney said, he would take that on board.

However, he could not grant the higher allowances arbitrarily “to be popular” even though he lived closed to the naval base in Cork.

In relation to increasing the numbers of Defence Forces personnel serving abroad, as had been promised to the United Nations, he said numbers abroad had increased by about 100 since he had assumed the Defence portfolio last year.

The Government was committed to sending an additional estimated 180 personnel to Lebanon next year, while 175 were being deployed in the German-led EU battle group next year.

He said he was committed to doubling the number of women in the Defence Forces from 6 per cent at present.

He believed making the fitness test when applying to join the Defence Forces “easier and less intimidating” might attract more women.

The Defence Forces needed more women to work on issues such as gender-based violence in post-conflict situations abroad.

“We need them for doing complex jobs that aren’t simply about training to be a warrior,” he said.

“It’s also to be a diplomat, to be a counsellor and a supporting individual in the environment they are working in. And men and women bring different skills into that.”