Natasha McShane’s grandmother will ‘never give up hope’ 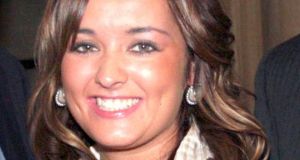 “I’d love some day that she would have a conversation, because, I mean as far as I am concerned, I’ll never give up hope,” said Bernadette McShane, the grandmother of Natasha McShane (above), who suffered brain damage when attacked by Heriberto Viramontes in Chicago three years ago.

The grandmother of of Co Armagh woman Natasha McShane has spoken of her family’s hope and prayers that Ms McShane - who suffered brain damage in an attack in the US - will someday recover her abilities.

Bernadette McShane said her granddaughter was receiving round-the-clock care but was capable of repeating only a few words since she and a friend Stacy Jurich were attacked and robbed by Heriberto Viramontes (34), in Chicago three years ago.

“You can’t really sit down and have a conversation with her,” Bernadette McShane said. While Natasha was “more bright of herself” and “has made slight improvements” of late, she said her granddaughter’s ability to speak was limited.

This was in stark contrast to the image of the promising young student who Bernadette described as “academically brilliant”, and who had “worked very hard” and was “very excited” to be in the University of Illinois. Bernadette said the family had all expected Natasha “to have a great career” and were now hoping and praying just for improvements in her condition.

“I’d love some day that she would have a conversation, because, I mean as far as I am concerned, I’ll never give up hope,” Bernadette told the RTÉ Radio lunchtime news. She said the “old saying is that yesterday is history, tomorrow’s a mystery, so I am just hoping that, you know, in time, I’d love to see Natasha making a recovery”. She added she had “great belief in the power of prayer and I never give up hope”.

Members of Natasha’s immediate family were in court for the verdict and in a statement afterwards Natasha’s brother Conor said the attack had brought “great sadness and sorrow” to their home.

Viramontes, who is to be sentenced later this year, is facing a maximum of 120 years in prison.