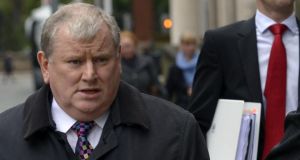 Ronnie Hanna has been informed that he is not to face charges in relation to the £1.2 billion sale of Nama’s Northern Ireland assets portfolio to US investment fund Cerberus. Photograph: Brenda Fitzsimons / The Irish Times

Former senior Nama executive Ronnie Hanna has been informed that he is not to face charges in relation to Project Eagle, the £1.2 billion sale of Nama’s Northern Ireland assets portfolio to US investment fund Cerberus, senior sources have confirmed.

In August this year the North’s Public Prosecution Service (PPS) reported that two senior business people were to be prosecuted in connection with the UK National Crime Agency (NCA) investigation into the sale for £1.2 billion of Nama’s Northern Ireland property loan book.

The PPS did not name the individuals but their solicitors confirmed they were 78-year-old Frank Cushnahan and 49-year-old lawyer Ian Coulter.

The PPS at the time said that six others who were investigated would not be charged. Well-placed sources have now confirmed that among the six is Mr Hanna.

In June 2016 the TD Mick Wallace used parliamentary privilege in the Dáil to name Mr Cushnahan and Mr Hanna, who was Nama’s former head of asset recovery in Northern Ireland, as two of the people being investigated by the NCA.

Five months later Mr Hanna confirmed to the Dáil’s Committee of Public Accounts, by letter, that he had been arrested on allegations which he “vehemently denied” and that he had, at that time, not received any indication from either the NCA/PSNI or the PPS that he was “no longer a suspect”.

Both Mr Hanna and Mr Cushnahan have consistently denied any wrongdoing in relation to their dealings with Nama.

Mr Hanna’s lawyers wrote again to the public accounts committee last week, the Business Post reported, saying that he “has now received formal notification from the PPS that that organisation has decided that he will not be prosecuted in relation to any alleged offences linked to Project Eagle”.

“As a result, he is now co-operating with the Cooke Commission,” the lawyers informed the committee.

That commission was established in June 2017 under High Court judge John Cooke to investigate the 2014 sale of Nama’s Northern Ireland assets to Cerberus.