Judges impressed by level of care as village awarded top prize, narrowly pipping Killarney, Ennis and Kenmare to the honour - and €10,000 cheque

Moynalty, Co Meath has won the overall title of Ireland’s tidiest town. The announcement was made by Minister for the Environment Phil Hogan who presented the winner’s trophy and a cheque for €10,000. The village was a worthy winner, he said. 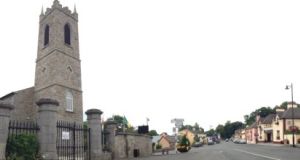 Moynalty has won this year’s Tidy Towns competition. Minister for the Environment Phil Hogan announced the results in Dublin this afternoon. Photograph: Department of the Environment

The announcement was made by Minister for the Environment Phil Hogan who presented the winner’s trophy and a cheque for €10,000. The village was a worthy winner, he said.

“I am always impressed by the ambition and enthusiasm of all those involved in the Tidy Towns effort.”

Praising the high levels of volunteerism shown by the leading contenders. Mr Hogan added: “The results of their efforts are obvious in the attractive, well cared-for towns and villages we see throughout the country. It is clear that working together, getting to know your neighbours and getting things done increases people’s pride in where they live and helps to build vibrant communities.”

Moynalty was category winner in the tidiest village section of the competition and narrowly pipped rivals in other categories to take the national title. The village scored 316 points out of a maximum of 400, beating Killarney, Co Kerry, winner of the large town category which scored 315 points.

They were among 832 entries from throughout the Republic in what was the 55th staging of the competition which is sponsored by Supervalu.

Moynalty scored highly across a range of sectors ranging from the built environment, to landscaping, wildlife and natural amenities, litter control, sustainable waste and resource management, overall tidiness, residential areas, roads, streets and back areas as well as in its general impression.

According to the adjudicators: “The quality and content of the entry material was admired, as was its succinct presentation.”

They added: “A very high level of care was evident - even on the less than sunny day upon which the adjudication took place. Weed and litter control were seen to be excellent. The presentation of buildings was uniformly impressive.”

Looking ahead, the judges also noted: “Your plans for this area are indeed ambitious. The outdoor recreation areas of Moynalty seem to keep getting better. It is hoped that these are used to their fullest.”

Also mentioned were the high quality of pavement and road surfaces and the new planting areas.

Among a host of other awards and presentations were cheques of €1,000 each to Tourism Towns. The winners were: Cobh, Co Cork; Drogheda, Co Louth; Ennis, Co Clare; Kenmare, Co Kerry; Kilkenny; Letterkenny, Co Donegal; Mulranny, Murrisk and Westport all in Co Mayo; and Tralee, Co Kerry.

A Sustainable Development Award of €1,000 was made to Mote Park Conservation Project in Co Roscommon

Moynalty, which was taking part in the competition for the 53rd time, succeeds Abbeyshrule in Co Longford which took the overall award last year with a total of 312 points.