‘We cannot allow brevity of her life, or malice which cut it short, to spoil her memory or impair her beauty’ funeral told 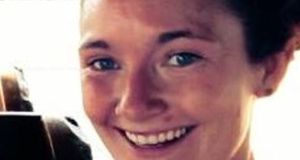 During her funeral , Danielle McLaughlin was described as a colourful character, like a gem which caught the light and reflected it in all its beauty around her.

It should have been the darkest of days. But family and friends of Danielle McLaughlin ensured they honoured the “bright and vibrant” Donegal woman in a special way at her funeral on Thursday.

Instead of traditional dark clothing, many mourners at St Mary’s Chapel in Cockhill on the outskirts of Buncrana, wore bright colours in memory of the 28-year-old who was murdered in India two weeks ago.

Mourners wearing yellows, pinks, bright blues, oranges and lilacs c ame from as far away as New Zealand, Australia, Scotland and England for the final farewell while others wore flowers in their hair and around their necks.

Just before 11am, Ms McLaughlin’s remains were taken from her home in Marian Park as a guard of honour from her former secondary school, Scoil Mhuire, lined the route to the church.

Her hearse was laden with floral tributes and her wicker coffin had hundreds of flowers attached.

Among the chief mourners were her mother Andrea and sisters Joleen, Traigheannach, Seanne and Sky Marie.

In his homily to a packed St Mary’s Church, chief celebrant Buncrana parish priest Fr Francis Bradley said Ms McLaughlin’s was a long journey which she had still not completed.

Life was a journey

“For her, life was a journey, many journeys in fact. Travel for her was genetic. And her death too, must be seen, not as the end, but instead, the beginning of yet another stage, the most exciting perhaps of them all, as we pray she journeys now into eternal life.

“ Just as Danielle’s mother and sisters and friends accompanied her every step on social media no matter where she went, and just as her friends, Nicole Farren and Sherridan Smith made their way to Goa to accompany her on home, so too, we now accompany Danielle with our love and our prayers as we bid her ‘safe home’,” he said.

So many had gathered at the church as a heart-broken people to honour a beautiful daughter, a cherished grand-daughter, a thoughtful sister, a loyal friend, a free-spirit, a remarkable classmate, a gentle neighbour; the little girl who became the lovely woman who was Danielle McLaughlin, he said.

“We try to get our heads around her loss. Her death so young; the suddenness of it; its callous nature would leave us speechless were it not for the fact that we gather here too as a people of faith, hope and great love, determined that in the resurrection of Jesus Christ, we, as his followers, can never allow death to have the final word. Danielle herself, with her kindly heart and searching mind, would never countenance such a thing,” he said.

He said she may have been born in Scotland but it was in Buncrana where she found a home and a community.

“She was disarmingly kind and forgiving; her warm nature and open heart drew people into her ever-widening, extensive and international circle of friends.

“She had a gentle but powerful way with her – for it seems that just one encounter with her was enough to change someone’s life.,” he said.

During her funeral, Ms McLaughlin was described as a gifted student in dance and drama, who became a colourful character, like a gem which caught the light and reflected it in all its beauty around her.

“We cannot allow the brevity of Danielle’s life, or the malice which cut it short, to spoil her memory or impair her beauty,” Fr Bradley said.

Fr Bradley told mourners that death always brings a sense of powerlessness – never more so than when it happens someone so young, so kind and loving, and somewhere so very far away.

Following her funeral mass, Ms McLaughlin was buried in the adjoining cemetery alongside her late grandparents.