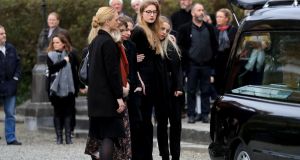 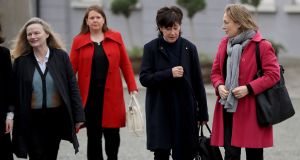 Literary critic, author and journalist Eileen Battersby was a “brilliant”, “beguiling”, “beautiful”, “courageous”, “dynamic” romantic who lived by her principles and eschewed social pretension, her funeral has heard.

“You never took leave of the kingdom of childhood,” said her daughter Nadia in a moving farewell to her mother at St Peter’s Church, Drogheda, Co Louth, on New Year’s Eve.

“True to form, you were unique, never subtle, bold as brass,” she told a packed congregation in the restored 18th-century church overlooking the river Boyne.

The award-winning former Irish Times literary correspondent – who latterly contributed to the Financial Times and Los Angeles Review of Books among other publications – was en route to feed horses with her daughter when she sustained fatal injuries in a single-vehicle crash in Co Meath on December 22nd.

She died in hospital on December 23rd.

President Michael D Higgins has led the many tributes which have been paid to her by national and international writers, artists, publishers, colleagues and friends.

Nadia recalled a happy atmosphere in the car in those few moments before the crash. Her mother had just sent her last literary review, they had shared a coffee, were listening to “techno” music, and were planning a trip to Prague together – “your first two weeks off in years”, she said.

“And then I lost you . . . ,” she said, expressing gratitude that her mother had sustained no lingering injuries, and had felt no pain.

She described her mother as romantic, who brooked “no pretension”, was “incapable of cunning or guile” and was “disturbed by hypocrisy, inspired by generosity, forgiveness and redemption”.

Qualities of wit, courage, brilliance, vision, loyalty, grace, elegance, and capacity to love imbued her upbringing and “like most romantics, you were very vulnerable”, and easily hurt, she said.

“You never took leave of the kingdom of childhood,” said Nadia, instead finding “purity” in music, art, literature and in the animals that they both loved at their Boyne valley home.

“No words can describe the violence of this pain,” she concluded, expressing her grief and regret that her mother would never see her own children.

“No daughter had a better mother . . . ,” she said, turning to her “singular, dynamic friend”, before reading the words of Francis Ledwidge’s poem, Lullaby.

Nadia’s father, former attorney general and barrister John Rogers, paid tribute to Battersby’s “maverick spirit” and her “principled position on the big issues and the everyday”.

She led an “endlessly working life”, he said, recalling her journalistic career which began in London. During a series of memorable interviews for The Irish Times, her method had involved not so much posing questions as “talking about herself”, he said.

It proved highly successful, although it was not a technique he could have employed in his own legal profession, he observed.

Mr Rogers described the high esteem in which she held certain writers, ranging from Joseph Roth to WG Sebald to Dostoevsky, and recalled their detailed walks with Nadia through the archaeologically-rich landscapes of Kildare and Meath.

An Irishwoman’s Diary, published in The Irish Times on December 22nd, 2001, encapsulated Eileen’s spirit, he said. In her diary, the journalist recalled how she was driving with Nadia, then aged five, in Co Offaly when the door of a trailer carrying their dogs inadvertently opened.

All dogs were eventually recovered, even a missing puppy after a search of nine miles of bog road”on foot, by bike and by car” into the night. All the while, Nadia had insisted the puppy was alive – “ please keep on looking”.

Reading from Patrick Kavanagh’s poem, Is, Mr Rogers recalled how an argument about it with Eileen convinced him that she did not accept that it was enough to “look on”, and that life was about “engagement and participation”.

She left “nothing unchallenged”, he said.

Music by organists Brian McIvor and David Lambe, pianist Michael Holohan, cellist and organist Claire Fitch, and singers Niamh Browne and Brí­d Ní­ Ghruagín included some of Ms Battersby’s most loved pieces by Chopin and JS Bach – the latter once described by her as “God’s own composer”.

The service in the Protestant church, dating from the 12th century with centuries old bells - and once attacked by Cromwellian forces as Ms Battersby had recorded in this newspaper- was led by Rev Iain Jamieson.

Her wicker coffin – bedecked in roses, lilies, heather, and with a photograph of her with one of her horses,Sophie – was borne out by her daughter Nadia, with close friends Lauren Savage, Jessica Kinsey, Venetia Taylor, Lydia Roche, Olivia Gray and Sophie Soar.

President Michael D Higgins was represented by his aide-de-camp Comdt Dorothy Donnelly. And among the many in attendance were colleagues from literature and publishing, including Susan Curtis, Katie Donovan, Peter Fallon, Luke Gibbons, Anthony Glavin, Alan Hayes, Sinead MacAodha, Michael McLoughlin, Declan Meade, James Ryan, Ronan Sheehan, Dermot Somers, Gerard Smyth and Jonathan Williams. Friends and neighbours included Johnny Burke from Kiltale, Co Meath, who was due to supply her with hay for her horses on the day she died.