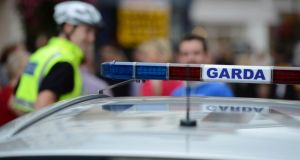 Gardaí in north Cork have appealed for witnesses to a fatal collision on the old Watergrasshill-Rathcormac Road on Sunday. File photograph: Frank Miller/The Irish Times

Gardaí in north Cork have appealed for witnesses to a road traffic collision which claimed the life of a 55-year-old motorcyclist.

Sean Coleman from Cairn Court, Duntaheen Road in Fermoy was fatally injured when his motorcycle collided with a car on the old Watergrasshill-Rathcormac Road.

The collision happened at Scartbarry, near Watergrasshill at about 1pm on Sunday. Emergency services were called but Mr Coleman was pronounced dead at the scene.

The driver of the car, a woman in her mid-30s and an 11-year-old passenger were uninjured but badly traumatised and were treated for shock following the crash.

Mr Coleman’s body was removed to Cork University Hospital for a post-mortem examination.

Mr Coleman, who was originally from Castlelyons, is survived by his wife Monica and daughter Aisling.

The road was closed for several hours and diversions were put in place via the N8 to allow a Garda forensic crash investigator to carry out an examination of the scene.

Gardaí have appealed to anyone who may have travelled the old Watergrasshill to Rathcormac road at the time of the crash to contact them at Fermoy Garda Station on 025-82100.

Mr Coleman’s death is the first on Cork roads this December and brings to 19 the number of people killed in road traffic collisions in Co Cork so far this year.