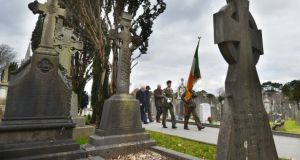 Sean Hurley was buried along with 20 other casualties of the Easter Rising in Glasnevin Cemetery in Dublin. Photograph: Alan Betson/The Irish Times

Much of the current debate about the necessity of the 1916 Easter Rising is speculation which fails to take account of the motivation of those involved in the rebellion, a commemoration to the only Cork Volunteer to die in Dublin during Easter Week has heard.

Military historian, Gerry White told the commemoration to Irish Volunteer, Sean Hurley that Ireland today is a country a peace and one which has rightfully taken its place in the community of nations and the events of Easter Week 1916 were central to that becoming a reality.

“In recent months there has been much debate as to whether the 1916 Rising, the War of Independence that followed and other events that took place between 1913 and 1923 were necessary – this is mere speculation,” said Mr White.

Speaking at a commemoration in Sean Hurley’s home village of Drinagh near Dunmanway in west Cork, Mr White said “the reality is that these events happened” and “they were defining moments in the history of Ireland ad led to the creation of the state that we live in today”.

“Therefore we owe it to the people who took part in these events not to debate whether they should have taken place but rather to examine them in the context of their own time and try and understand why they took place,” he told the gathering of several hundred people.

Mr White, himself a native of Drinagh, recalled how Sean Hurley had been working in London when, together with his close friend, Michael Collins, he returned to Ireland in January 1916 to avoid conscription and to take part in the forthcoming rebellion against the British.

He told how Sean Hurley was involved in some of the most intense fighting of Easter Week when, as part of the Four Courts garrison under Comdt Ned Daly, he faced an onslaught of British attacks on Church Street where he was fatally wounded on the morning of April 29th just before the surrender.

“He was taken to Richmond Hospital and it was there that the boy from Drinagh breathed his last. As his life ebbed away from him, his thoughts once again turned to his family here in West Cork and his last words were ‘Tell my mother, I died fighting for Ireland’,” said Mr White.

“Like many who left these parts, Sean Hurley never returned to Drinagh. Today, he rests in peace in Glasnevin Cemetery in Dublin in the same earth that holds the remains of his friend, Michael Collins and others who sacrificed their lives for an independent Ireland.”

“Although he died in 1916, the legacy of Sean Hurley and the others who fought in the Rising is visible all around us – it is visible in the freedom and democractic system of government we enjoy and in the members of Óglaigh na hÉireann, our Defence Forces who have joined here today.”

Among the hundreds who gathered in Drinagh for the commemoration were about 100 relatives of Sean Hurley, including several cousins from the United States as well as his grandnephew, David Hurley from Ballinhassig and David’s daughter, RTÉ Sports presenter Jacqui Hurley.

David Hurley said: “As a family, we are hugely proud of the sacrifice that Sean Hurley made and it’s great for Drinagh that the part played by a local man in the Easter Rising and the events leading to the foundation of the Irish States is now being remembered 100 years on.”

President Michael D Higgins sent a message of support, describing Sean Hurley as “a young man who encompassed the idealism, vision and inspirational courage that was to drive the events of Easter 1916, events which changed the course of Irish history.

“As a nation, we are deeply grateful to those who, like Sean Hurley, gave of their lives to gift future generations with independent citizenship,” said President Higgins, adding Drinagh can be rightly proud of their native son for his courage and self-sacrifice on Ireland’s journey to freedom.

The Proclamation was read by Lieut Cian Clancy and the tricolour was raised by Lieut Denis Sheahan while a wreath was laid on behalf of the Government by Cork South West Fine Gael TD Jim Daly and on behalf of the Hurley family by Tom Walsh, a first cousin once removed of Sean Hurley.