Mother of Irish Olympian had to buy tickets from Norwegian website 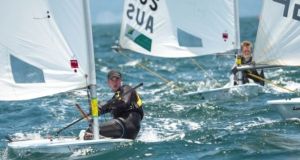 Finn Lynch on his way to winning the Irish mens’ Laser nomination in Mexico in May, 2016

The mother of one of the members of the Irish Olympic team had to buy her tickets for the opening ceremony from a Norwegian website.

Grainne Adams, mother of Finn Lynch, the youngest member of the Irish sailing team, told Newstalk Breakfast that despite numerous efforts to contact Pro10 she eventually bought tickets online from a Norwegian website and got her tickets for her son’s event at a kiosk in Rio.

Pro10 Sports Management is the Irish authorised ticket reseller for the Rio Olympics.

Getting a place on the Olympic team in Rio was a surprise for Finn as he had been training with a view to going to Tokyo when he qualified, she said. His trials were in December, April and May at which time his family began looking for tickets.

“I found it difficult even to figure out how to get tickets. I worked out that it was Pro10, I rang and rang and rang and every day, several times a day, you’d just get straight through as if to voicemail and then it would say that voicemail was full.”

Ms Adams said she had no success in speaking to anybody about tickets. “I was getting a bit desperate. I Googled Pro10 a lot and found some person’s name with a phone number.

“I phoned them, said this is the trouble I’m having. The person I rang didn’t have anything to do with tickets or the Olympics, but he said he would let them know and they would get back to me. Which they did the next day and said that all of Ireland’s tickets had sold out in January, they had a few tickets left for the athletics.

“What I was looking for were tickets to the opening ceremony because sailing isn’t the easiest sport to watch from the land. I had my heart set on seeing Finn walking with the Irish team under the Irish flag. I thought that’s it as there was only one race where it would be easy to see him.”

She said she thought she was unlucky because it was so late in the day and because she was looking for tickets for the opening ceremony.

“I did all sorts of things looking for tickets, including looking at sites selling above the odds. One had tickets for the opening ceremony for €1,200, but then the price began coming down, every day, but the lowest it ever came to was €600.”

In the end, Ms Adams got her tickets via a Norwegian website at the suggestion of Finn’s Norwegian girlfriend.

“We went on a Norwegian website where people can sell tickets for anything and found a man who had booked through Norwegian official channels. He was selling two sets of seven tickets, which included two tickets to the opening ceremony, I bought them at face value.

She said that when the story broke about tickets she didn’t associate it with tickets that should have gone to parents and family.

“Despite the opening ceremony tickets, the family and friends scheme was to give you two tickets to whatever event your child was performing in, but you had to buy the tickets yourself first and then claim the money back afterwards.

“It was totally confusing trying to figure it out.”

Ms Adams said she hoped that parents and family of Olympic athletes will not have to go through the same problems in Tokyo.