More than 2,600 households use Airbnb ‘to make ends meet’ 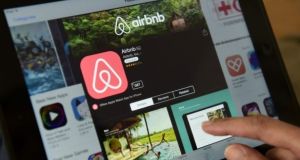 Airbnb users contributed an estimated €74 million to communities across Ireland over the last 12 months, according to a new report by Airbnb. Photograph: John MacDougall/AFP/Getty Images

Almost half of the 6,000 people in rural Ireland who rented either all or part of their home to tourists through Airbnb over the last year did so to make ends meet, with the average income generated through the service amounting to €2,700.

Airbnb users contributed an estimated €74 million to regional and rural communities across Ireland over the last 12 months, according to a new report published by the accommodation service.

The report, titled Home-Sharing: Empowering Regional and Rural Ireland estimates that €47 million was spent on goods and services in Ireland by people staying in Airbnb accommodation outside of Dublin with €27 million spent on directly renting homes and rooms between September 2015 and August 2016.

When Dublin is excluded from the picture, 331,000 people stayed in 6,000 different properties spending an average of 2.6 nights in each. Households earned an average of €2,700 – with 44 per cent, or 2,640, telling researchers they were using Airbnb income to make ends meet.

The report also indicates 88 per cent of Airbnb hosts in Dublin share their home with visitors, while the number falls to 64 per cent in rural areas – suggesting more people are renting out second or holiday homes which would otherwise lie empty.

“This report shows the positive impact this new form of tourism is having on more remote parts of the country that haven’t traditionally benefited from tourism,” said Airbnb spokeswoman Aisling Hassell.

She said communities where alternative accommodation is not widely available had particularly benefited from Airbnb, while individual households had been able to generate a little extra income to help make ends meet.

Minister for Rural Affairs Heather Humphreys said the report illustrated “the positive impact the sharing economy is having on rural Ireland”.

She also said the benefit of the Airbnb model was that it “can bring new visitors to remote locations, providing a new potential source of revenue for communities. By providing alternative accommodation options in rural villages and towns, we can help to grow tourism and have a positive knock-on impact on other businesses in rural Ireland”.

The report comes after a bad month for the website which enables people to list or rent short-term lodging in residential properties.

The management company at an apartment complex in Spencer Dock recently wrote to all its tenants warning them not to rent whole apartments or rooms to Airbnb users, on the basis that it could be in breach of the terms of planning permission for the development.

And An Bord Pleanála upheld a planning decision that a two-bed property in Temple Bar’s Crown Alley had undergone a material change of use – due to its Airbnb activity – and was thus not exempt from planning regulations.

The council’s initial decision, in favour of TBR, was subsequently appealed to An Bord Pleanála by the apartment’s owner in July.