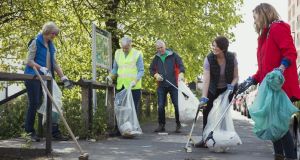 The most common charitable purpose of registered charities last year was to benefit the community. Photograph: Getty Images

The number of charities registered in Ireland last year surpassed 10,000 for the first time, a new report by the Charities Regulator has said.

The most common charitable purpose of registered charities at the end of 2019 were purposes that were of benefit to the community (54 per cent), followed by the advancement of education (30 per cent), relief of poverty or economic hardship (9 per cent) and religion (7 per cent).

There were a total of 649 concerns raised with the Charities Regulator during 2019, of which 166 related to the issue of bogus clothing collections. This represented a 5 per cent decrease on the number of concerns raised in 2018.

Of the concerns raised with the Charities Regulator in 2019, approximately 91 per cent related to issues in the combined categories of “legitimacy of charity”, “governance issues” and “financial control and transparency”.

Helen Martin, chief executive of the Charities Regulator, said concerns regarding clothing collections constituted a “significant number” of the concerns received in 2019, resulting in a national radio campaign.

“This particular campaign highlighted the importance of engaging with the wider public to tackle issues which have the potential to divert much needed donations from registered charities in Ireland,” she said.

Ms Martin said a particular focus for the regulator today was the “challenge that Covid-19 represents”.

“I would like to thank all those involved in the charity sector, from those working on the front line, to those supporting local communities across the country.

“We will continue to monitor its impact on the sector, and we will provide information and guidance to charities as they navigate this very difficult period.”