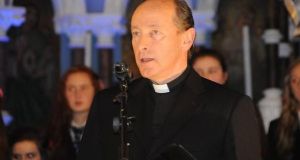 The Catholic Bishop of Waterford and Lismore, Phonsie Cullinan, has retracted his criticism of the HPV vaccine over the past week and apologised for his “poor judgment”.

In an abrupt u-turn, Bishop Cullinan said he was sorry if any woman felt he was slurring their integrity with his remarks on promiscuity among young people.

He described as bad judgment his attacks on the vaccine, when he claimed it was “lulling” young girls into promiscuity. “That was an error of judgment. It was far too simplistic a way of looking at it,” he said.

His apology was delivered in an interview on the WLRFM Deise Live programme on Monday, and reiterated in a statement issued afterwards by the Catholic Communications Office.

A debate was still needed on the issue of sexuality and young people, he told the Waterford radio station. There had to be a “better way” of bringing happiness and peace to young people and this involved doing “what is right and good”.

Bishop Cullinan said he chose the “wrong vehicle” to express his views on teenagers having sex when he referred to the vaccine.

“I put it across in a very hamfisted way. The real issue is that so many young people are experimenting and there is peer pressure. This is a discussion we need to have,” he told presenter Eamon Keane.

“I think this vaccine can greatly contribute to helping the fight against cervical cancer.” However, he said “there are still questions out there” in relation to the vaccine and the Regret group of parents, which has campaigned against it, should not be “rubbished”.

‘Up to the doctors’

Asked whether he now thought the vaccine was safe, he said “I should really leave that up to the doctors,” adding that he did consult “some doctors” before his statements last week.

The Bishop’s remarks on the vaccine provoked widespread criticism, with the HSE warning it could threaten girls’ lives by making them less likely to get protect themselves with the Gardasil vaccine against cervical cancer.

In his statement, issued through the office of the Irish Bishops’ Conference in Maynooth,the bishop said: “I wish to apologise for contributing to any misinformation, or indeed for causing upset to anyone, concerning use of the human papilloma virus (HPV) vaccines.

“My intervention was in response to concerns which I had received about HPV vaccines from parents wishing to make the best health decision on behalf of their children, and from young people alike. My intention was solely motivated to protect people from the HPV.

“I was not fully informed about the vaccination programme and I can see now how HPV vaccines can contribute greatly to lowering the rate of cervical cancer. As I have learnt, possession of full information is paramount on this vital health issue.”

The World Health Organisation and other medical authorities have said the vaccine is safe and despite claims of side-effects, no study has identified a link to Gardasil.

Last week, Bishop Cullinan claimed the vaccine was a “lifestyle issue” as well as a medical one “because it affects the lifestyle of our young people”. “We have to do better than to give our boys condoms and our girls injections at the age of 12 years,” he said.

He suggested the money spent on the vaccine would be better spent on programmes to encourage young people to live “clean and chaste lives”.

Bishop Cullinan also argued the vaccine was only partially effective and he advised parents to pay more heed to the arguments of anti-vaccine campaigners.

Critics pointed out that the bishop has no medical or scientific qualifications and should therefore not be making pronouncements on such issues.