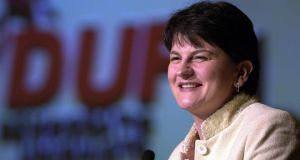 Exploration company Tamboran Resources is to legally challenge decisions made by Northern Executive ministers which effectively bars it from drilling for shale gas in Co Fermanagh.

DUP energy minister Arlene Foster tonight issued an order which means its licence to explore for shale gas near Belcoo has now been terminated.

This follows on the decision in August by the SDLP environment minister Mark H Durkan refusing Tamboran permission to drill a single test bore hole to determine if there are viable deposits of shale gas in Co Fermanagh.

It was expected that the results would also have indicated whether there were also viable quantities of shale gas in the general region taking in counties south of the Border such as Leitrim and Cavan.

There was a “Catch 22” element to Ms Foster’s decision not to extend the licence to explore for gas which Tamboran may use in its legal challenges against the decisions by the energy and environment departments.

In her decision, Ms Foster noted that in March she granted a six months extension to Tamboran’s Fermanagh licence on the basis that it would drill the bore hole. However, as the test bore hole was not drilled, she was not extending the licence.

Tamboran is likely to contend that it was placed in an impossible decision as it could not drill the bore hole because Ms Foster’s fellow minister Mr Durkan refused the company permission to do so.

The decision is likely to delight anti-fracking campaigners on both sides of the Border. For several months they have maintained an anti-shale exploration camp outside the quarry near Belcoo where Tamboran wanted to drill a bore hole to test for gas deposits. They argued that fracking would damage health, the environment, farming and tourism in the wider area.

Tamboran said tonight it was not abandoning its hope of exploring for the gas. In a statement, it said it has instructed lawyers to take judicial reviews against both the decisions of Mr Durkan and Ms Foster.

A Tamboran spokesman said that before Ms Foster made her decision, the company informed her department it would take a judicial review against Mr Durkan’s earlier bore hole decision.

“After investing in excess of £3 million to date, we are disappointed that DETI (the Department of Enterprise, Trade and Investment) failed to consider the option of a temporary extension pending clarification by the Court as to the timelines for the judicial review,” he said.

“This decision as it stands could close the door on a project that could deliver up to 50 years of secure energy supply, in excess of 2,000 jobs and billions of much needed investment in the local economy,” the spokesman added.

“We have consulted with counsel and we are also moving to a judicial review of DETI’s decision. It would not be appropriate for us to comment further at this stage,” he said.

Earlier this year Tamboran’s regional director Dr Tony Bazley, who is based in Co Down, urged politicians and the public keep an open mind on shale gas extraction by fracking - the shattering of oil- and gas-bearing shale deposits by forcing down fluids and sand, thus releasing the gas.

“We believe the people and government of Northern Ireland have a right to know if there are economic quantities of gas beneath our feet, and that is all we are seeking to do at this stage,” he said.

Judge has ‘great sympathy’ for man set to lose his Co Louth home 14:49
Dublin man may have been stabbed to death by woman in parking space row 14:42
‘I think she is terrified’: Woman facing deportation to Nigeria from Sligo 14:29
Health worker double-paid thousands for same shifts by HSE and agency 13:58
Hoteliers call for State funding to implement eco-friendly measures 13:55