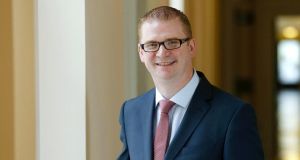 On British government welfare reform Simon Hamilton, the DUP Minister of Finance, says he has one message for Gerry Adams and Sinn Féin, “It’s a good old Ulsterism: wise up.”

At his impressive modern office overlooking Belfast harbour the 37-year-old Minister enters the quarrel between Sinn Féin and the DUP that both Gerry Adams and First Minister Peter Robinson agree is threatening the future of the powersharing Northern Executive.

The leaders make their points from conflicting perspectives. Adams in a strong recent statement warned that the political process is “in trouble” because of an “anti-Good Friday Agreement axis within unionism”.

Robinson accused Adams of making his statement to try to divert attention from the welfare reform dispute. He said that Sinn Féin’s refusal to sign up to the welfare shakeup is threatening meltdown at Stormont.

He believes Gerry Adams is personally blocking welfare reform in Northern Ireland because it could lead to Sinn Féin, with its big election ambitions in the Republic, facing double-standard accusations that it supports austerity in the North but opposes it in the South.

Sinn Féin’s position on welfare reform could cost Northern Ireland more than £1 billion of cuts in supports and services over the next five years which would mean real hardship, says Hamilton.

“They are living on another planet economically and fiscally. I don’t like the realities of this any more than they do but you have got to accept the reality; you cannot stick your head in the sand and just hope they will go away, they are not going to go away. Reality will bite.”

While Adams has urged the Executive to unite against a “Thatcherite agenda”, Hamilton says the reality is that British chancellor George Osborne isn’t for turning. Adams insists that welfare cuts can be resisted but Hamilton produces a letter from Osborne’s number two in the Treasury, Danny Alexander, advising the Minister that “costs associated with non implementation will escalate . . .”

So far there have been penalties of just £13 million. But in October he is to announce further cuts of £87 million up to March next year, while in the following financial year the penalties will be £114 million. “And it starts to ratchet up quite considerably after that.”

He says that based on the annual savings the British government would expect to make in Northern Ireland when welfare reform is fully rolled out that annual penalties thereafter will be between £200-£300 million.

Hamilton adds that this isn’t to take account of other British treasury cuts that are due to be imposed in the coming years as attempts are made to end Britain’s national debt.

Some elements of the reform such as a “bedroom tax” where people on welfare who have a spare room will lose some of their benefits will not apply in Northern Ireland following strong lobbying by the Northern Executive. Under the reform households on welfare will be allowed to receive a maximum of about £27,000 in benefits.

Hamilton, while having misgivings, believes that the changes may encourage more people back to work: “There are parts of Northern Ireland where generations of families have not worked or have not worked for any length of time, and that is not a good thing.”

Alliance Minister for Justice David Ford said forced cuts would directly impact on police recruitment and “keeping people safe” while, very tricky from a Sinn Féin point of view, Alliance Minister for Employment and Learning Stephen Farry said the planned expansion of the University of Ulster’s Magee College in Martin McGuinness’s city of Derry was now put on hold “indefinitely”.

As the penalties increase and the cuts dig in there will be many more such reports. This will create a brinkmanship battle where Sinn Féin, with support from the SDLP, resists the welfare overhaul while unionist and Alliance politicians blame Sinn Féin for reduced services and potential job losses.

“What we are facing now is just the tip of the iceberg,” warns Hamilton.