Minister has ‘serious concerns’ over Goal as Andrews resigns 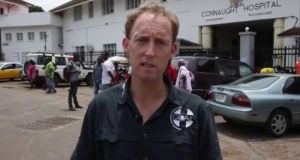 Goal chief executive Barry Andrews told the aid organisation in August that he would resign.

Minister for Foreign Affairs Charlie Flanagan has said he has serious concerns over the operations of Irish aid agency Goal in Syria after it emerged the organisation’s chief executive Barry Andrews is standing down.

Mr Andrews resigned as Goal reels from a US investigation into its multimillion-euro Syria operation.

The US government’s foreign aid arm, USAID, earlier this year told Goal and a number of other agencies in the field to halt certain procurement with American funds pending the outcome of its inquiry into alleged bribery and bid-rigging involving suppliers on the Turkey-Syria border.

Mr Flanagan said: “I have been seriously concerned about the issues under investigation by the US relating to procurement practices for humanitarian assistance operations for Syria, since learning of the investigation at the end of April.

“My department has been in regular contact with the US authorities and with Goal. I outlined the Government’s concerns in a meeting with the chair and members of the board of Goal last month.”

He said wanted to acknowledge Mr Andrews’s personal contribution to Goal over the past four years.

The USAID investigation, which is being carried out by the US office of the inspector general (OIG), has resulted in the Department of Foreign Affairs withholding €10 million in funding from Goal. The chief operating officer, Jonathan Edgar, who was a highly influential figure at the agency, resigned last month.

In a statement to The Irish Times, in response to questions about imminent changes at senior levels in the agency, Mr Andrews confirmed he was stepping down after concluding that Goal needed “a fresh start in terms of leadership”.

Speaking on Morning Ireland on Thursday, Mr Andrews said he took responsibility for certain things that went wrong in the organisation.

“We grew very quickly as an organisation and I think it’s fair to say that during that growth period when responding to the Ebola crisis in Sierra Leone, responding to natural disasters and to the Syria crisis, some of our internal controls didn’t develop and evolve at the same speed,” he said.

He said after the investigation started in April, US officials pointed out the some of the systems Goal had in place were weak. He said this led to the firing of some staff in Turkey as well as staff changes in Dublin.

“We have an Action Plan in place now, whereby we’re committed to providing an assurance framework to our donors and out supporters to demonstrate how serious we are. My stepping down is part of that,” he said.

Mr Andrews, a former Fianna Fáil minister who took the helm at the organisation in 2013, informed the Goal board in August of his intention to step down as soon as his successor could be identified. That appointment will be made in the coming days.