Parents of 11-year-old who took her own life present petition with 30,000 signatories to HSE 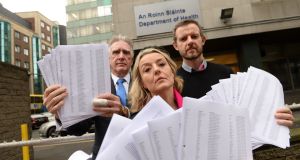 The parents of an 11-year-old girl who took her own life have presented a petition to the Department of Health calling for the creation of an independent suicide authority.

Milly Tuomey died on January 4th, 2016, weeks after posting a message on Instagram saying she was unhappy with her appearance and wanted to die.

Fiona and Tim Tuomey delivered the petition, which contains more than 30,000 signatories, alongside Noel Smyth, chairman of 3ts, a charity working to prevent deaths by suicide.

Mr Smyth said they would like to see an independent authority, similar to the Road Safety Authority (RSA).

“We’ve looked at various different models. We love the RSA, because it’s independent. It only reports to the PAC (Public Accounts Committee), it has its own budget and implementation methods and it has a target. It has a target effectively to save lives, we want the same programme,” he said.

“The first thing that the suicide prevention authority would do is an audit of all the services that we have at the moment, identify what are the gaps and make them better.”

The National Office for Suicide Prevention (NOSP) which operates under the auspices of the HSE, is currently implementing a suicide reduction strategy called Connecting for Life. It is being rolled out on a county-by-county basis and aims to reduce suicide progressively between now and 2020.

“An independent entity would deal with everything from education in schools, ensuring that everyone on the frontline, whether it be gardaí, prison officers; all have had suicide prevention training,” Mr Smyth said. “We want to make sure that we get into schools early, that we get in and explain to people about issues such as cyberbullying and how to control that.”

In an open letter to the Minister for Health Simon Harris, Mr Smyth said the inner workings of the HSE and various health committees “remain a mystery with little accountability offered and even less progress made to address the quagmire of inadequate suicide prevention services”.

Speaking on RTÉ’s Late Late Show earlier this month, Ms Tuomey said she and her husband had not known the warning signs to watch out for.

“I think that the main reason we wanted to come on and talk to people was to really get across the message that you don’t know,” she said.

“There were highs and there were lows. (Milly) could be withdrawn, she was irritable - I mean it was a mix. But again, we’re coming from a position that unless somebody already has a diagnosed mental illness, you don’t know.”