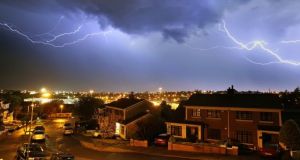 Met Éireann has issued a status orange warning for torrential rain in four counties. The lightning storm over Waterford on Saturday night, taken from Ursuline Court in the city. File Photograph: Noel Browne

Some 50mm of rain is expected in the counties of Longford, Cavan, Leitrim and Roscommon as thundery downpours cross the country. The status orange warning is in place from midday until 6pm.

The Met Office in the UK has issued a yellow thunderstorm warning for Armagh, Fermanagh, Tyrone and Derry.

The Road Safety Authority has advised motorists to exercise caution and to note that it takes longer to stop a vehicle on wet roads. It also advised that motorists should take special care when driving behind goods vehicles as they generate a considerable amount of spray which reduces visibility

More thunderstorms are expected across the country for the next three days as the warm and humid weather continues.

Some of the most spectacular thunderstorms of recent years were seen over the weekend in the south.

This map shows the time of lightning strikes that affected Ireland yesterday and Saturday, using the colour per hour scale on the right.
View the strikes for any date using the drop-down on our Lightning archive page https://t.co/0R3aaluKk0 ⚡️ pic.twitter.com/pWpnfzsgXh

In Clare nine cattle in a field near the Dunlicky Road cliff drive outside Kilkee are suspected to have died after being struck by lightning on Sunday afternoon.

Lightning is expected to continue into Tuesday and Wednesday. “We have an unstable air mass over us,”explained forecaster Liz Coleman.

“We have hot day time temperatures which are causing these thunderstorms, but low pressure is not too far away from us and that is what is causing the instability that we have been seeing over the weekends. We will continue that kind of weather up to Wednesday.”

Monday looks like it will see the warmest weather of the week with highs of 23 degrees in the midlands, but there will be heavy and thundery rain in the west and north-west especially around Donegal.

The rest of the week will be noticeably cooler as winds switch around to the north with highs of 20 degrees.

There will also be showers, but they are likely to be in parts of Ulster and north Leinster.

On Thursday showers will be most frequent in Munster and south Leinster with light northerly winds.

The good news it that warm and settled weather is on its way to Ireland, but it is uncertain yet when it will arrive.

The long term forecast for next weekend and into the early days of next week is indicating high pressure will build over the country bringing with it settled weather.

Ms Coleman said she expects temperatures to reach into the mid-20s next week.

Parts of the country have suffered from drought over the last two months. The weather station at the Phoenix Park recorded its driest spring (March, April and May) since records began 170 years ago.

However, rainfall levels are still below average for the month. Last week Irish Water announced a six week nationwide hosepipe ban because of the lack of rain in recent months.