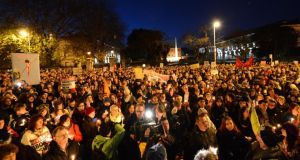 A call to repeal the constitutional amendment protecting the life of the unborn was heard at a public meeting in Cork last night.

The only way to constitutionally guarantee full rights to women seeking an abortion in Ireland is to repeal Article 40.3.3 which was inserted in the constitution in 1983 and which acknowledges the right to life of the unborn, the meeting organised by pro-choice group Cork Women’s Right To Choose.

Dr Sandra McAvoy of the Cork Women’s Right to Choose group said the recent Protection of Life During Pregnancy Bill enacted by the government did nothing more than legislate for rights which women already had enjoyed after the Supreme Court judgement in the X case.

“It’s shocking and an indication of how backward the State is in its thinking about women that we are still fighting for women’s right to be recognised as full and autonomous citizens with a right to request terminations in a wide range of circumstances,” she told the meeting entitled ‘After the X-Case Legislation - Where Now’.

Dr McAvoy told the meeting that Minister for Justice Alan Shatter said last year that the only way to deal with this constitutional guarantee of inequality is to repeal Article 40.3.3.

Dr Mary Favier of Doctors for Choice told the meeting that in some respects nothing much had changed for Irish women on foot of the recent legislation as she argued that it will continue to be difficult for a woman whose health is at risk to get an abortion.

“Some things have got worse - for example, a woman who undertakes a self administered abortion with tablets bought on the internet (a legal procedure elsewhere) can be imprisoned now for fourteen years,” said Dr Favier.

However Dr Favier welcomed the opening of debate about abortion as an important and necessary part of reproductive healthcare and she urged doctors to be more willing to engage in such discussions.

“This is what we must continue to encourage as doctors in the future. It will be what will inevitably change the law in Ireland, so that we will achieve the aim of safe and legal abortion as an option for all women in Ireland if that is their choice,” she added.