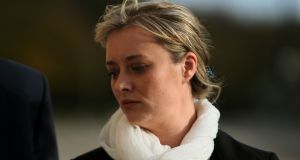 Former senator Máiría Cahill said Martin McGuinness had not moved away from his IRA past as many had claimed. Photograph: Brian Lawless/PA Wire

Former senator Máiría Cahill has described Martin McGuinness’s response to her going public on allegations of rape as “disgraceful”.

Ms Cahill, who was from a well-known Republican family in Belfast, went public in October 2014 to state that she had been repeatedly raped as a teenager by a member of the Provisional IRA.

She also revealed details of the IRA internal investigation which she claims forced her to confront her abuser and that it prevented her from getting justice through the courts.

Ms Cahill said that when he found about the rape allegation in 2000, Mr McGuinness kissed her on the cheek while putting a “comforting arm” on her shoulder.

“It was a brief encounter, no words exchanged, but it was enough to know that he knew,” she wrote in a column in the Belfast Telegraph.

He went on to acknowledge that she had been raped, but indulged in “victim-blaming” she claimed by adding: “I regret that she was not able to go into court to confront the person she alleges raped her in the same fashion that republicans are being confronted now.”

She said that response was “disgraceful” and added: “This type of victim-blaming to deflect from the IRA’s responsibility was typical from the republican movement over the years and, at the time, I was raging and hurting all over again. He also said he couldn’t speak for an organisation that had gone. Conveniently enough.”

Ms Cahill suggested that the incident, which occurred just three years ago, showed that Mr McGuinness had not moved away from his IRA past as many had claimed.

Instead he was deploying “some nimble footwork to make it look like he was somewhat sympathetic to the victim, while still covering for the IRA. Old habits die hard.”

Ms Cahill said Mr McGuinness will be remembered as a “likeable man who did some despicable things in the first half of his life and who redeemed himself somewhat during the latter part”.

Though she acknowledged his contribution to the peace process, she said it was “incredibly sad” that it came so late for so many families bereaved during the Troubles.

He had been a man, she stated, who “oversaw some horrific murders and abuses by virtue of his position within the IRA” and also within his own community.

Ms Cahill referred to a book From Guns to Government written by journalists Kathryn Johnson and Liam Clarke which gave details of republican women being targeted by their own community because they were dating soldiers.

“Some woman, who is named in the book, was kidnapped, had her hair saved and red lead poured all over her body. The women who held her captive refused to release her until McGuinness arrived and gave his permission.”