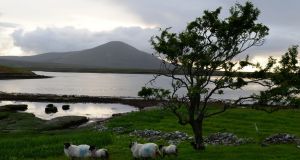 Wilderness is something Minister for Rural and Community Development Michael Ring knows a bit about after 23 years in politics.

However, the relatively new front bench member was keen to extol the benefits of wild places in his home constituency on Friday, when he announced the expansion of north Mayo’s national park at Ballycroy.

The park is to grow from 11,000 to more than 15,000 hectares, with the transfer of Coillte land in the Nephin mountains – known as “Wild Nephin”.

It will make Ballycroy, which already has coveted “Dark Sky” designation for stargazing, as the third largest of the State’s six national parks.

Ballycroy, which is part of the Natura 2000 network, encompasses Atlantic blanket bog, including one of the last intact active systems in Ireland and western Europe at Owenduff, to the west of the Nephin Beg mountain range.

The expansion will improve access points to Ballycroy, and allow for a link to the Great Western Greenway extending north to Bangor Erris and Ballycastle.

Joint management by Coillte and the National Parks and Wildlife Service (NPWS) is to be consolidated into sole NPWS management, under a long-term lease with a nominal fee.

NPWS’s divisional manager for the west Denis Strong said that the “rewilding” of areas managed by Coillte would involve replacing coniferous with deciduous trees in some parts, but key specimens such as mature Monterey pine would be kept.

The Marine Institute was advising on planting deciduous trees in aquatic zones, Mr Strong said. “The Western Way already runs from Connemara through the Nephins to Ballycastle and the idea is that we will work with consultants on a conversion plan that develops walking and cycle routes. This is a long-term project, and today is the first chapter.”

Mr Ring, who said he had initiated the project when junior minister in the Department of Heritage, expressed delight at its move to fruition.

New Minister for Heritage Josepha Madigan was unable to attend, but issued a statement welcoming the expansion.