Maths Week kicks off with activity around the country 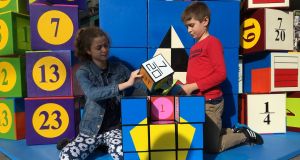 Shoppers on Grafton Street had a mathematical pop quiz sprung on them on Saturday, as the annual national maths festival kicked off in Dublin.

Volunteer students, mathematicians and “mathemagicians” challenged the unsuspecting public to solve puzzles and problems without any opportunity for last-minute study. But the games weren’t meant to summon traumatic memories of being called up to the blackboard or trying to beat the clock during stressful maths tests.

“We want to show that maths can be fun. Yes it is challenging, but it’s also very rewarding,” said Dr Sheila Donegan, manager of Calmast, at Waterford Institute of Technology, and co-founder of Maths Week Ireland. “So many people think that maths is something you do in school, and we want to show that actually it’s not just something you do in school, it’s vital to survive in the world. Everybody does maths.”

The festival, now in its eleventh year, was born from Donegan’s work with Eoin Gill promoting engineering and science to Ireland’s students. They soon realised, Donegan added, that it was actually students’ anxiety towards mathematics making them hesitant to build on those fundamentals, and pursue their interest in engineering and the sciences.

Part of the reason, Donegan says, is that there is a widely held perception that there are those who can and those who definitely cannot, when it comes to mathematics.

“Some people think that you have to be hardwired for maths, and that isn’t the case. Obviously people are going to like some subjects in school more than others,” she said. “Not everybody is going to be a world famous mathematician, more or less in the same way that everybody isn’t going to be a premiership footballer, yet we still want to encourage people to do football and to do exercise. So it’s very important that people see how relevant maths is and also that maths can be fun.”

Activities involving colourful blocks, hoops and ropes were all on hand to test and entertain passersby, and to remind people that they engage with geometry, trigonometry and probability every day.

Eleven-year-old Sana Belabbas likes maths but still finds it very hard. Using mathematical reasoning to magically tangle and untangle rope knots was her favourite of Saturday’s activities, she said. Not just because it was fun and made her feel like she had accomplished something tricky, but because learning to “untie yourself when you’re stuck together basically means if I ever rob a bank I could find my way out.”

Currently 200,000 people across the whole island have registered for presentations and workshops throughout the week. Organisers expect 250,000 participants by the festival’s end on October 23rd.

You can find more details about what else is happening in Dublin and around the country as part of Maths Week at mathsweek.ie.