Martin McGuinness to take on SDLP in Derry constituency 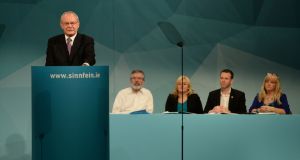 Sinn Féin Deputy First Minister Martin McGuinness is to contest for a place in Derry for the Northern Ireland Assembly, in a bid by the party to attack the SDLP in its heartland.

The official announcement is due to take place on Saturday following a speech by Mr McGuinness at Sinn Féin’s selection conference at the Millennium Forum in Derry.

Mr McGuinness was moved initially from Foyle to Mid-Ulster in 1997 because he could not challenge the strength of the SDLP in former leader John Hume’s stronghold.

An Assembly transfer raises the prospect that he could run in Foyle against former SDLP leader Mark Durkan in the next House of Commons elections.

However, the SDLP says Sinn Féin’s decision to run Mr McGuinness in Foyle rather than Mid-Ulster, where he has been an MLA since 1998, is a result of concerns about the popularity of new leader Colum Eastwood.

Yesterday, Sinn Féin sources denied being concerned about the SDLP’s new leader and have said moving Mr McGuinness back to Foyle is aimed at helping the party to win an extra seat in his home constituency “where Martin’s heart is”.

However, Mr Eastwood said: “I take it as a compliment Martin is standing in Foyle. Derry is the heartland of John Hume and the SDLP and has had very strong representatives there for a very long time.

“Mark Durkan increased his majority in May at the Westminster election and I think it was a poor show for Sinn Féin in the constituency.”

Sinn Féin is chasing three Assembly seats there on May 5th, but there has also been speculation about an Independent candidate or a People Before Profit candidate, perhaps in the form of socialist, trade union activist and writer Eamonn McCann, targeting Foyle too.

An SDLP activist since he was a young teenager, Mr Eastwood was Derry’s youngest mayor, aged 27, and was then elected to the Assembly in 2011.

At last night’s launch of Sinn Féin’s election candidate for Sligo-Leitrim, Mr McGuinness was quoted as saying: “For the last 19 years, I have been very proud to represent Mid-Ulster. I am now going back to my home city of Derry. Martin Kenny will be a TD for this constituency. I hope to be a TD for Foyle very soon too.”