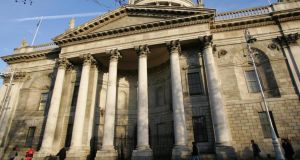 The man had asked the High Court for injunctions preventing his girlfriend from leaving the jurisdiction for an abortion until it can be ascertained whether she is acting of her own free will.

A man has claimed before the High Court that he fears his pregnant girlfriend is being brought by her family to the UK against her will to undergo an abortion.

The man asked the High Court today for injunctions preventing his girlfriend from leaving the jurisdiction for an abortion until it can be ascertained whether she is acting of her own free will.

Ms Justice Mary Laffoy adjourned the case until Friday morning so that the woman can receive legal advice.

The couple, who cannot be identified for legal reasons, are both foreign nationals but have been residing in Ireland.

In an affidavit to the court the man said his girlfriend “is happy to be pregnant” and “never expressed any desire to have an abortion”, but her family is of the view she will be “ruined” if she has a child with a non-white man.

He says her true intentions are that she she had registered with a maternity hospital, and was looking forward to have a CAT scan in the near future. She also went buying baby clothes for the child.

Séamas Ó Tuathail SC, for the man, said his client believed his girlfriend was being forced to undergo an abortion by her parents.

Ms Justice Laffoy this morning granted the man permission to serve notice of his proceedings against his girlfriend aimed at preventing her from leaving the jurisdiction and undergoing an abortion until it can be determined whether she is acting of her own free will.

The judge also directed the Attorney General be made a notice party to the proceedings. However, counsel for the attorney told the court this afternoon that she did not believe she had a role to play in the action.

Among various orders sought, the man wants an injunction restraining his girlfriend’s parents from conveying her out of the jurisdiction until the court it can be ascertained whether she is acting of her own free will.

The man, in asking the court to vindicate the rights of his unborn child, also wants the court to order an urgent investigation to be undertaken by a forensic scientist to ascertain whether she is being brought to the UK against her will before permitting her to leave the country for an abortion. He has no desire to restrain her from travelling should that be her freely held wish, he said.

The couple have known each other for a year but her family have not accepted their relationship, the man claims. He alleges his girlfriend’s family are deeply unhappy with the fact she is in a relationship with someone of non-European origin.

They had moved in together at a location away from her family, who also live here, but were harassed at their home by members of her family. He claims that in recent days she was forced by her family to leave the house they had shared. He also claims a member of his girlfriend’s family threatened to kill him if he attempted to come near her.

Covid-19: AstraZeneca vaccine should not be given to patients under 60, Niac advises

4:22 Coveney’s London talks on North riots expected to go ahead this week