‘Try not to ignore people who are homeless,’ urges head of Depaul Ireland 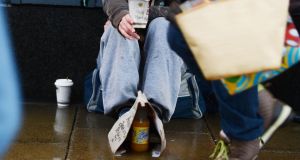 Chief executive of Depaul Ireland Kerry Anthony suggested people should give homeless people ‘some sort of acknowledgement, even if it is just a smile or to say “hello”.’ Photograph: Alan Betson

A homeless man lay dead on a Belfast city centre street for three hours while pedestrians and motorists passed by, it has emerged. The man in his early 40s was found dead on Tuesday evening on Franklin Street, a side street close to Belfast City Hall, the Ulster Hall and the Europa Hotel. The man had a drink problem and police say they are not “treating his death as suspicious”.

However, chief executive of Depaul Ireland Kerry Anthony said she was informed by the PSNI that the man lay dead on the street for three hours before police were alerted.

Franklin Street is not a main thoroughfare but many pedestrians and motorists use it on a daily basis.


Two children
Ms Anthony said the man was called Jackie, but said Depaul Ireland, which runs the Stella Maris centre in the docks area of Belfast, was not releasing his surname in deference to his family.

“He is from Northern Ireland and has two young children – I am sure his family are devastated,” she said yesterday.

“He was a lovely man,” she added. “It is important that we as a society don’t close our eyes to people in need. Try not to ignore people who are homeless. Try to recognise that it is a human being who may be in a time of distress or struggle.”

She explained that he had been staying at the Stella Maris centre for the past six months with 20 other people.

He was last seen by staff when he left the building before noon on Tuesday. “Staff are incredibly upset about Jackie’s passing,” she said.


Compassion
Ms Anthony urged people to show compassion. “I would have a degree of sympathy with people who might feel slightly intimidated from seeing people drinking on the streets. But if you see somebody lying on the streets and if you can’t go to see if they are okay, certainly the human thing to do is to contact one of the agencies for the homeless or call the police.”

“People should give such people on the street some sort of acknowledgment, even if it is just a smile or to say ‘hello’.”

Stella Maris is a so-called wet hostel where people are allowed to bring alcohol into the building but intake is managed and monitored.