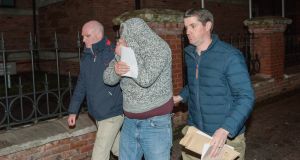 A 54-year-old man has been jailed for 10 years for a frenzied knife attack in which he broke into a family home last Christmas and almost killed a mother and injured her three children.

Det Garda Mark Durcan said the family were preparing to go to bed in their home in Montenotte on Cork’s northside when a man wearing a balaclava and carrying a knife entered the woman’s downstairs bedroom.

He punched the woman’s 17-year-old daughter, momentarily knocking her unconscious before taking off his balaclava. The woman recognised him as O’Sullivan who had been related to her through marriage.

O’Sullivan lunged forward to stab the woman as her daughter regained consciousness and fled to a neighbour’s for help before her other daughter, aged 20 and her son, aged 10 came into the room after hearing screaming.

O’Sullivan stabbed the woman a number of times in the upper chest, resulting in a puncture to her lung before then stabbing her in the abdomen, resulting in further serious damage to her internal organs.

“I felt hot trickling pouring down my chest. I knew I was stabbed but I didn’t feel the knife going in - he was shouting ‘Whore, I’m going to kill ye’ - I felt we were all going to die . . . Tommy is going to kill us all,” she later told gardaí.

The woman managed to pull the man’s jacket over his head and kicked out at him, which prevented further injury but her older daughter was wounded in the hand and her young son was stabbed under the armpit.

O’Sullivan emerged and shouted “Do ye remember me now - was it worth 25 grand?” in reference to a civil action taken by the woman’s daughter against him for assault in 2012 where he was ordered to pay €25,000 in damages.

The emergency services were alerted and the woman and her younger daughter and son were taken by ambulance to Cork University Hospital where she spent nine and a half hours in theatre as doctors fought to save her life.

Gardaí arrested O’Sullivan a short time later at his home, heavily intoxicated and after he sobered up, he admitted attacking the woman but had no recollection of assaulting her children.

He portrayed himself as being under huge strain at the time and told gardaí he decided to end his life and then decided he was going to take the woman with him.

Det Garda Durcan said he had no doubt but O’Sullivan would have succeeded in his plan to kill the woman but for the bravery of her children who arguably had saved her life at the cost of being injured in a very deliberate attack.

The woman, who can’t be named in order to protect the identity of her children, told the court in a Victim Impact Statement her husband had died several years ago and she had been left to rear her three children on her own.

“When Tommy O’Sullivan pulled off the balaclava, I fully realised who was trying to kill us . . . he had threatened me previously that he would kill me - during the attack, he said ‘Remember I told you I was going to come for you’.

“I had a nine and a half hour surgery and was left in a bad way because I had lost so much blood - we have recovered somewhat, the physical scars remain visible but the emotional scars are worst of all.”

“I don’t know when this will be all over. I watch my children having nightmares and hear them scream so we are constantly reliving that night,” she said in her statement read on her behalf by prosecution barrister, Sinead Behan BL.

“It is so hard for anyone to imagine how you would have planned and intended to cause me and my family such harm, leaving me almost dead - you intended to do this, you came prepared, I hope God will forgive but I cannot.”

Defence barrister, Ray Boland BL pleaded for leniency pointing out that his client had saved all four injured parties the trauma of having to give evidence in a trial situation by his early signed plea of guilty.

Judge Sean O Donnabhain said the level of planning where O’Sullivan brought a balaclava and a knife with him was a seriously aggravating factor as was the fact he broke into a family home at Christmas and launched a violent attack.

However the fact he had pleaded guilty and spared his victims the trauma of having to give very distressing evidence in a trial was a mitigating factor while he had also expressed some remorse.

He said he believed the appropriate sentence was 12 years but he suspended the final two years on condition that O’Sullivan stay away from the family and never have any contact with them again upon his release.