Man arrested in connection with murder of Gerard ‘Jock’ Davison 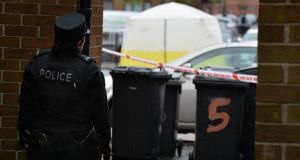 A PSNI officer watches over the scene of the fatal shooting of former senior IRA figure, Gerard ‘Jock’ Davison on Welsh Street in the Markets area of Belfast on Tuesday. Photograph: Charles McQuillan/Getty Images

A 41- year-old man was being questioned on Wednesday by detectives from the PSNI’s serious crime branch about Tuesday’s murder of former IRA commander Gerard “Jock” Davison.

Detective Chief Inspector Justyn Galloway, who is heading the murder investigation, said that the suspect was arrested in Belfast this morning and was being questioned at a police station in the city.

“A property in north Belfast was searched last night as part of the overall investigation,” he added. “I would again appeal to people who were in the Welsh Street area at 9 am yesterday and who have information about the shooting to talk to detectives at Musgrave police station,” said Det Chief Insp Galloway.

Mr Davison was shot dead on Welsh Street in the Markets close to city centre Belfast around 9 am on Tuesday morning. The 47-year-old former IRA leader in Belfast was shot as he made his work to a local community centre where he was a community worker with the Markets Development Association.

Police are still trying to determine a motive for the shooting. Det Chief Insp Galloway has already ruled out sectarian involvement, indicating that loyalists are not suspected, and that he also does not believe dissident republicans were to blame.

Mr Davison was implicated in the 2005 murder of Robert McCartney outside Magennis’s pub close to the Markets. He was accused both of ordering the murder following a row in the pub and that he subsequently arranged for IRA members to forensically clean up the bar so that evidence could not be found that could lead to the apprehension of his killers.

Mr Davison denied these allegations at the time. His uncle Terence Davison was later acquitted of Mr McCartney’s murder.

There was sympathy in the Markets for Mr Davison and his family. However, other sources said that over the years he had made a number of enemies, raising the possibility that he could have become the victim of a grudge killing.

Another source queried whether he might have run foul of drugs dealers in the area.