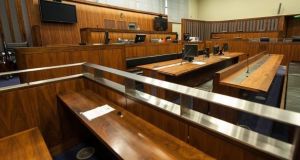 Judge Helen Boyle noted that it was a sustained and determined assault which had left Mr Clark both with a permanent physical scar.

A 25-year-old man who threatened to smash a concrete block down on top of a man’s head if he didn’t hand over CCTV footage has been jailed for two years.

Tony Delaney pleaded guilty to a number of offences including assaulting Gary Clark (43) causing him harm, causing criminal damage and attempting to rob him at his home at Monard, Rathpeacon, Co Cork on October 3rd, 2019.

Det Garda Brian Murphy told Cork Circuit Criminal Court that Mr Clark was alone in his mobile home at around 2.30am when three people pulled up in a VW Passat and attempted to steal his jeep.

The driver of the Passat drove up right against the door of the mobile home to try to prevent Mr Clark getting out. Mr Clark managed to get out but was knocked to the ground by Delaney.

Delaney then dragged him by the hair into a kneeling position and began to beat him before realising the entire episode had been caught on a CCTV camera.

Delaney then picked up a concrete block and threatened to smash it into Mr Clark’s head if he didn’t hand over the CCTV tapes. However, Mr Clark managed to get back into his mobile home to get some reprieve.

Delaney retreated when he realised Mr Clark had three large dogs in the mobile home and left in Mr Clark’s jeep.

Mr Clark suffered bruising to his face as well as a laceration to his ear after his earring was pulled out violently.

Det Garda Murphy said gardaí were able to identify Delaney from the CCTV footage. They recovered Mr Clark’s jeep when they called to Delaney’s home at the Spring Lane Halting Site near Blackpool in Cork.

Delaney was arrested but made no admissions during interview, said Det Garda Murphy.

He said Delaney had a total of 56 previous convictions including for robbery, unlawful taking of a car and criminal damage. He was on bail on other charges when he committed these offences.

Mr Clarke told the court he didn’t sleep at night as a result of the attack and he was unable to work for a period. He also said he was afraid to leave his mobile home as he feared it would be stolen as well.

Judge Helen Boyle noted that it was a sustained and determined assault which had left Mr Clark both with a permanent physical scar but also had a psychological impact on him, which were all aggravating factors.

She said the fact that the assault on Mr Clark and other offences happened when Delaney was on bail was also an aggravating factor.

She acknowledged that Delaney had pleaded guilty at an early opportunity and had expressed remorse and had come up with some €2,500 as a gesture of his remorse to his victim.

The judge imposed a three-year jail term but suspended the last 12 months and she ordered it be consecutive to the three-year term he is currently service because the offences were committed when on bail.