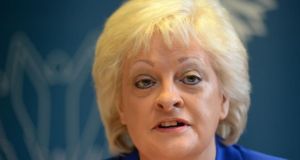 The vast bulk of members of the out-going Fine Gael parliamentary party have declined to back a charter drawn up by the trade union movement setting out what it described as fair conditions for workers in the workplace.

The charter was supported by five Fine Gael TDs and senators, Pat Deering, Frank Feighan, John Paul Phelan, Terry Brennan and Hildegarde Naughton. None of the others signed up to the document.

Members of Renua also decided not to sign up to the five-point charter as did a number of independents.

The Irish Congress of Trade Unions’ charter for fair conditions at work contains commitments to support measures such as a living wage, currently estimated at € 11.50 per hour, fair hours of work, rights to representation for workers and collective bargaining, respect, equality and ethics at work as well as an undertaking that these would also apply to employees in companies which receive publicly-funded contracts.

The charter was supported by all members of the out-going Labour, Sinn Féin and Fianna Fáil parliamentary parties.

TDs who are members of the Social Democrats and the Socialist Party also backed the charter.

Among the independent members of the out-going Dáil who declined to sign up to the charter were Mick Wallace, Michael Fitzmaurice, Michael Lowry, Noel Grealish, Michael Healy Rae and Shane Ross.

Two MEPs, Luke Flanagan and Marian Harkin did not sign up to the charter.

The general secretary of the Irish Congress of Trade Unions Patricia King said each Oireachtas member and MEP had been contacted extensively over recent months.

She said Congress had a detailed log of contacts made to elicit the position of public representatives in relation to the charter.

The findings of the survey will be published in full by Congress on its website. It is also to provide the data to affiliate unions so that they could inform their members.

Ms King said Congress would also be contacting all candidates in the election, who have not already stated their position, to determine their stance on the charter.

Ms King denied the trade union movement was seeking to intimidate politicians to sign up to the charter in the run up to the election.

“It was a very simple process. We set out our campaign points and asked each individual Oireachtas member to give us their view and sign out pledge. In the case of some they did and others they did not.”

She said all had a free choice.