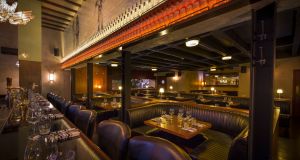 Dublin restaurant Luna, which has been open for less than a year, has been recognised as the best eatery in Ireland.

The Drury Street business opened in June 2015 and is based on the concept of a New York Italian restaurant.

The awards were presented on Monday night and some 70,000 online nominations were received in the various categories.

Luna community manager Leo Molloy said they were “over the moon” at the win which they attributed to hard work. “We are only open a year but we have a century of experience behind us,” he said. The owner John Farrell, head chef Karl Whelan, sous chef Hugh Higgins and Mr Maxwell are long time veterans of the scene. The decor is meant to convey the sense of a 1950s style New York restaurant with leather modular seats and red velvet curtains. The food is modern Italian.

Irish Times restaurant critic Catherine Cleary gave it 8 out of 10 when she visited in December. She concluded it was “spendy but fun. Dinner for three with a bottle of wine came to €178”.

She also described it as “shameless, from its gold leaf and caviar down to a menu postscript telling you the staff were ‘tailored by Louis Copeland’. It’s been a dambuster of a meal in which the first plates have outshone the heftier ones that followed. The food is good. For this kind of cash you could eat better elsewhere but I’m not sure you can have as much fun.”

The best chef in Ireland went to Michelin star winner Enda McEvoy of Loam restaurant in Fairgreen, Galway city. Co Cavan-born Mr McEvoy set up Loam in 2013 with his wife Sinead. He previously won a Michelin star at the Aniar restaurant in Lower Dominick Street, Galway.

The best hotel restaurant went to The Dining Room at Gregan’s Castle Hotel in Ballyvaughan, Co Clare, the best casual dining went to ETTO in Dublin and the best gastropub in Ireland went to the Oarsman in Carrick-on-Shannon, Co Leitrim which is owned by the Maher brothers, Ronan and Conor.

The best customer service went to the Kai Café and restaurant in Galway and best café went to Café Rua in Castlebar, Co Mayo.

The full list of regional and all-Ireland winners is as follows;

Dublin - The Brasserie at The Marker, Dublin

Connacht - The Pantry and Corkscrew, Mayo

Ulster - The Great Room Restaurant at The Merchant Hotel, Antrim

All-Ireland - O’Grady’s on the Pier, Galway