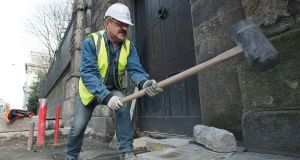 The pavement outside Trinity College Dublin being re-laid after the Luas works. Photograph: Dave Meehan 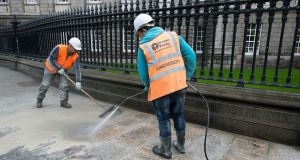 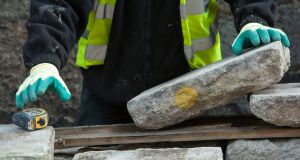 When the pavement outside Trinity College Dublin was removed each slab was numbered or marked so that they would go back down in exactly the same place. Photograph: Dave Meehan

The work began in 2014 with the removal of the Lady Grattan Fountain, made in 1888, from St Stephen’s Green, opposite the Dawson Street junction. Some stonework repairs have been done and the fountain is to be be reinstated close to its original location.

Some of the most painstaking work has gone into the removal and reinstatement of the College Green footpath around Trinity College, with granite blocks numbered and replaced in a series of bands.

The traditional curved line of the pavement has been altered slightly “to mirror the path of the new Luas line”.

The kerb formerly followed the line of the college railings.

The Luas Cross City project office said there would be “a build out” in the collar space on each side of Trinity’s College Green entrance.

This “will be finished in new Leinster granite with a clear delineation between the original historic material and the new granite, in accordance with best conservation practice”.

Molly Malone on the move

The Molly Malone statue was removed from its Lower Grafton Street site in 2014 and, following repairs, was installed in nearby Suffolk Street.

A Luas Cross City spokeswoman said the statue’s final location would be decided by the city council.

Discussions are also taking place between the council and the Capuchin Order about a new location for the Fr Mathew statue which was formerly on the central median of Upper O’Connell Street.

The Thomas Moore stature, placed in College Green in 1857, has been refurbished and is to be put back near its original location.

The removal of the Steine Sculpture, installed on College Street in 1986, while “challenging, due to the heavy concrete foundation that was poured around the standing stone”, was safely completed in 2014.

The Steine has been cleaned in readiness for its reinstatement this year.

Finely crafted, cast-iron bollards, some of the oldest pieces of street furniture in O’Connell Street, date from the first half of the 19th-century.

Originally designed as bases for lamp posts, they were adapted for use as vents for a substation in the 20th century, according to the Luas Heritage booklet.

The project team has completed a programme of repair and replacement of some of the lost and damaged decorative cast-iron scrolls on each of the bollards. The repair work was done by experts at Bushy Park Ironworks.

Discussions are ongoing with regard to a new home for the bollards.