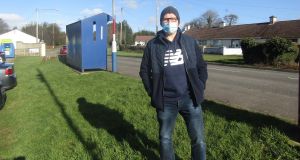 Gareth Hughes in Tullyally in Derry. ‘It now seems there’s more of a divide between Northern Ireland and the rest of the UK than between North and South.’ Photograph: Freya McClements 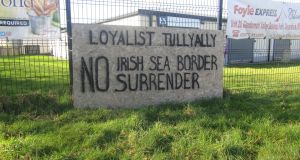 If the slogans affixed to walls and lampposts in Derry’s loyalist areas are clear about their opposition to the Irish Sea border, the people who live there are less so.

“Yes, the graffiti’s gone up,” was a typical response from one man out walking his dog in the Irish Street area of Derry’s Waterside last week, “but from what I’ve seen it’s all hyped up. There’s no feeling, no anger. There’s no bother with it.”

At the entrance to the estate, the red, white and blue paint on the kerbstones had faded, but there were other signs in evidence. “Loyalist Irish Street says NO to [the] Irish Sea Border” read one placard. In another nearby area, a sign from “Loyalist Tullyally”, proclaimed: “No Irish Sea Border” and “No Surrender”.

On Thursday, PSNI Chief Constable Simon Byrne revealed there had been 200 incidents since January of criminal damage, graffiti or posters and banners that indicate a lack of support for the Northern Ireland protocol. “We’re keeping a weather eye on that,” he said.

However, his “initial assessment” of the letter from the Loyalist Communities Council, which represents loyalist paramilitary groups, saying it was withdrawing its support for the Belfast Agreement, was that it was a “political move” and called for “calm heads”.

“We don’t see the prospect of a return to protest or violence,” Mr Byrne said.

The Irish Times spoke to people in several loyalist areas in Derry last week. Like everybody else, Gareth Hughes had seen the graffiti, but explained that he didn’t follow the news; he said that the Northern Ireland protocol and the Irish Sea border “seem to be complicated things” and he had had few discussions about them.

“I would prefer to be more strongly linked to the UK, but the way things are going, it does seem to be splitting up.

“It now seems there’s more of a divide between Northern Ireland and the rest of the UK than between North and South.”

One woman said many in this area would have “quite strong opinions” on this subject; she has a caravan and relatives in Donegal and felt that a hard border on the island of Ireland would have had greater consequences. “I don’t want to go back to the days of queuing at the Border.”

Another woman, who gave her name as Linda, described the “sense of anger” at the Irish Sea border, as well as the sense that this was “only escalating”.

The Northern unionist identity, she said, was under threat. “The Northern Ireland thing seems to be fizzling out now. We’re totally isolated, no thanks to our politicians, and I’m talking isolation in terms of unionism in general, not just loyalism.

“It pains me to see it, but it’s dying out. There are no benefits from what’s happened,” she said.

She is one of several who talked of shortages; she is no longer able to get roses, and her florist has gone out of business.

Hughes voted for Brexit but said people did so without knowing the full consequences. That said, he was sanguine about finding a solution. “Nobody ever said there was going to be a quick fix. It could take years to get things sorted.”

Ultimately, Covid is foremost in people’s minds, not Brexit.

“People won’t worry about writing on the wall,” said Lindsey Beveridge. “As long as I don’t catch Covid.”