Loggerhead turtle swept up in Storm Eva out of intensive care 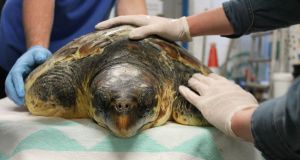 A previous loggerhead turtle being nursed back to health after it was found in a “cold stunned” state late on Kilmore quay beach, Co Wexford. Photograph: Gary Kendellen/Galway Atlantaquaria

A Caribbean loggerhead turtle which was comatose and suffering from frostbite when swept onto the southeast Irish coast with Storm Eva is out of intensive care in Galway’s Atlantaquaria.

The turtle, believed to be female and between five and eight years old, had sustained significant injuries to the shell and skin when found on Kilmore Quay beach in Co Wexford shortly before Christmas.

“Ninja, as we called it, showed some signs of life, but definitely was a critical care patient for the first couple of weeks,” Ms Greenwood said.

Ms Greenwood contacted Galway Atlantaquaria, as it has previous experience of rehabilitating turtles – most recently “Leona”, a teenage loggerhead washed up on Quilty beach, Co Clare just over two years ago and flown to Gran Canaria in December 2014.

Ninja is larger than Leona, at about 21.5 kg, and was in a similar “cold stunned” state with signs of frostbite, according to aquarist Joanne Casserly of Galway Atlantaquaria.

“Her skin will require a lot of treatment, and she is missing her front right flipper,” Ms Casserly said.

“Turtles are frequently found with missing flippers from either infection or injury, but can survive perfectly in the wild without same,” she said.

She paid tribute to the rehabilitation carried out in Co Wexford, and said the turtle was recovering well, feeding and diving.

“Her shell has to grow back, like a broken nail, and so it will take some months,” Ms Casserly said.

Galway Atlantaquaria and Seal Rescue Ireland have pointed out that “cold stunned” animals can appear to be dead, but may not be.

Those with concerns about such cases can make contact with the National Parks and Wildlife Service, the Irish Whale and Dolphin Group or through Seal Rescue Ireland’s 24-hour “hotline” at 087 1955393.