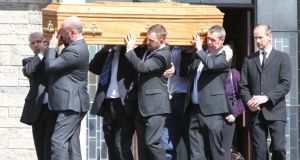 A parish priest has appealed to the Government to increase policing in rural Ireland at the funeral of a Co Limerick man who collapsed and died after thieves ransacked his home.

In his homily at Doon parish Church on Tuesday, Fr Ryan said the death of the 62-year-old bachelor will not be in vain as it has raised a national awareness of the fear that elderly people are experiencing in rural communities across Ireland.

“John – your passing was in tragic circumstances but you did not die in vain, and I feel there is a growing awareness of that need to look out and watch out for each other and perhaps our politicians will see to increasing a Garda presence on the ground in rural Ireland again to reassure all who feel so alone and vulnerable,” said Fr Ryan.

“There are many people living in fear who are on their own and we must reach out to them and keep in touch as best we can because they feel so isolated and vulnerable,” he added.

A number of symbols were place on the altar at the beginning of the funeral mass reflecting the interests and talents of Mr O’Donoghue, including a book, a hammer and a timber block.

“Everybody is saddened and upset at his tragic, unexpected and sudden death of John. He did not deserve for his life to end on Thursday afternoon, under those awful circumstances as he collapsed in shock and died, despite the best efforts of paramedics, friends and neighbours,” said Fr Ryan.

Among the chief mourners at Mr O’Donoghue’s funeral was his sister Christina, a retired nurse who was with her brother when he died.

“Even the tears fell from the skies as the heavens opened with torrential rain falling for about 30 minutes whilst John was departing this world,” said Fr Ryan, who administered the last rites to Mr O’Donoghue.

“And there beside John was his sister Christina comforting and assisting and then coming to terms with the sad reality, that because intruders had invaded the sanctity of their beautiful home and were causing such disruption within, John was dying as a result of a massive heart attack.”

Fr Ryan said Christina was never given a chance to say goodbye to her brother, who was described as a “quiet, inoffensive, and unobtrusive gentleman”, who loved reading, carpentry and gardening.

“He had an aptitude for carpentry an area in which he blossomed as he had special skills, indeed his expertise is on display not only in his own home but in many houses, clubhouses and buildings in our parish. Total perfection is written over all his work.

“John also loved gardening and his home surrounds, are a positive glowing advertisement in this area,” added Fr Ryan.

Mr O’Donoghue’s funeral mass took place in the church were he was baptised, and where he received his First Holy Communion and Confirmation.

“This is the church where his grandmother was sacristan for many years...tolling the bell throughout the day calling people to prayer and now the bell has tolled for the last time for John,” added Fr Ryan.

Mr O’Donoghue is also survived by his other sisters, Mary and Sheila and his brother Séamus.

Two men appeared before a special sitting of Limerick District Court last Saturday charged with entering Mr O’Donoghue’s home as trespassers and stealing a gold watch valued at €200 and £30 in sterling.