Life as a Muslim in the Irish Defence Forces 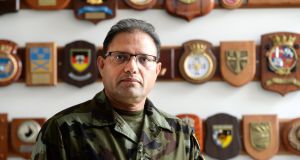 Shahzad Ahmad stepped off a train at Heuston railway station in Dublin on a cold December evening in 1992. He had just arrived from taking exams in Glasgow, and was struggling with his luggage.

Back then, in pre-9/11 times, any non-white person might be assumed to be a doctor “unless proven otherwise”, he joked.

An Irish man approached him at the station. “Doctor, I want to help you.”

He told him it was OK, he would manage.

Ahmad, now 52, fondly remembers the interaction, almost a quarter of a century later. “That was a really great welcome to the State, and I still remember it to this day.”

A medical graduate from Pakistan, he came to Ireland to pursue further medical education. The initial plan was to be a surgeon, but working as a doctor in Ireland wasn’t easy.

Six-month contracts meant he needed to start applying for new jobs halfway through previous ones. With a young family, this became increasingly difficult. “It was almost impossible to keep moving the children from one school to another and move the whole family.” The constant uprooting of their lives became unfeasible.

Today, he’s moved on from such a life to become Lt Col Ahmad, holding the position of Brigade Medical Officer with 2nd Brigade of the Irish Defence Forces.

Almost 10 years after he came to Ireland, he applied for a job with the Defence Forces, at age 37. He was commissioned on July 2nd, 2001, making history as the first Muslim person to join the Army.

The following year he was sent on his first mission overseas, to Eritrea. It was Ramadan, meaning he was fasting for a month from just before dawn until dusk each day. But the Defence Forces arranged halal food for him, something which he says “amazed” him.

“They would make sure I have something for the morning and the evening, so it was great,” he said. “They’d be quite concerned that I’m looked after properly.”

Lt Col Ahmad was also able to drop by the neighbouring United Nations camp for prayers and meals. Those stationed there were Jordanian and they would let him use their transport if he needed to. “I was very lucky,” he says.

In 2005, he was posted to Liberia, and this time the neighbouring UN camp had soldiers from Bangladesh. He could get halal meals at the camp and would also often go to pray there.

For Ahmad, Liberia provided both funny and terrifying experiences. He laughs as he recalls the story of the “three-star general” there.

When his group first arrived in Liberia, Bangladeshi troops received them at the airport. All the Irish soldiers were in uniform. Certain privates – first rank non-commissioned soldiers – in the Irish Army have three small stars on their badges.

“One of the officers from the Bangladeshi army asked [a private soldier] what are these stars for? And he said ‘I’m a three-star general’ and the next minute, that officer started saluting him, and any private soldier he would see, he would salute them. It was hilarious!”

But Liberia could also be a very dangerous place. When they arrived at Roberts Airport, exhausted after a 12-hour journey, there was an additional half-hour drive to their camp. During that trip, the soldiers’ situation became perilous.

“Irish troops were the first European troops to go there for peace enforcement missions. It wasn’t only a peacekeeping mission, and the difference is, you’re armed. When you enforce peace, if somebody attacks you, you have the weapons, the power and the authority to respond to it.”

At a crossroads, a group of Liberians were not happy to see European troops. The Irish convoy of three buses and a couple of 4x4s was stopped. Hundreds of armed Liberians blocked the road.

“Everybody was tired and fed up and the weather was very hot and humid and we just couldn’t wait to be out of there. But the commander said we should have our weapons ready. It was a matter of just one bullet fired from either side. It would have been a war – and God only knows what would have happened.”

After 20 tense minutes, a group of African UN troops came to the rescue when they heard what was happening. A collective sigh of relief – crisis averted.

Lt Col Ahmad recalls a time three years after that, in Kosovo, when he wanted to go to pray. He asked the sergeant driving him in a 4x4 to bring him to a nearby mosque.

Amused, he described people in the mosque doing double-takes as they saw the name “Ahmad” on a uniform that had an Irish flag sewn on the opposite side. “They looked surprised.”

After prayer, the imam came and shook hands with him, welcoming him with the Muslim greeting of “Assalamu alaykom” (peace be upon you). Ahmad returned the greeting.

“He said, ‘So you are Ahmad?’ I said yes. He said, ‘And you work for the Defence Forces?’ I said yes, I’m a doctor with the Irish Army. He said ‘MashaAllah.’”

“MashaAllah” is an Arabic phrase often uttered when a person has seen or heard of a good or surprising thing.

Ahmad says reactions to him have varied. In Liberia, one of the Bangladeshi officers had asked whether it would have been nicer to work for the Pakistani army than a “European army”.

“I said, as a doctor, my role is to treat the sick. I don’t look at their colour, race or religion,” he told him. “My primary role is to look after the people, to look after humanity. I never think that my approach would be different if it’s a Muslim or not.”

He says the Bangladeshi officer understood. But he accepts being a Muslim in a European army might not be as straightforward to some as it is to others.

Ahmad’s community have welcomed his status. He says they even felt proud, maybe to the point of considering him a role model of sorts.

Ahmad’s own pride at being in the Army is hard to miss. In his office at Cathal Brugha Barracks, a framed letter hangs on the wall behind him from former taoiseach Bertie Ahern. “My name is on that,” he says, reciting a line from the letter that he had been “granted commission as a member of the Defence Forces”.

He says his first day in uniform was a “very privileged day”. His father, who happened to be visiting Ireland at the time, accompanied him to the commissioning ceremony.

But a few months later, on September 11th, 2001, the world changed irrevocably. It is a day etched in his memory.

“I was in my office in Donegal in 2001 when the Twin Towers were attacked. I was watching it live on the telly,” said Ahmad. “At that time, I told my sergeant, I said listen, from today, the world has changed forever. It will be Muslims and it will be non-Muslims. This is going to stay with us forever.”

But at work, Ahmad says he has never felt judged since those events. He believes his colleagues who have known him for the past 16 years and have seen his work, behaviour and interactions are “extremely respectful and very welcoming and understanding”.

“Most of the Irish people, as we know, are understanding and know that these fanatics who, in the name of Islam, commit these stupid acts have nothing to do with Islam. They don’t know what the real Islam is. If they had known, they would never do these things.

“In Islam, we are not only told not to hurt humans, but not even spoil water or crops or harm anyone that isn’t fighting with you. If we take Islam in its real meaning, these people have absolutely nothing to do with it.”

Ahmad has been able to connect with locals on more than one occasion during his missions overseas, helping to bridge the gap between soldiers and the locals. But that’s not the only reason he thinks Muslim have something to add. He says “good, practising Muslims” can help to clarify misconceptions about Islam wherever they work, including in the Army.

“You don’t have to be a scholar. . . but if you are a simple, practising Muslim, then your contribution to the Irish nation and the Irish people will be tremendous, provided you are sincere and genuine in your own cause.”

Islam is a huge part of Ahmad’s daily life. A person is likely to spot a prayer mat or a copy of the Koran in his office in Cathal Brugha Barracks. To him and many Muslims, these are essential parts of everyday life.

During Ramadan, despite not needing to, his colleagues would try not to eat or drink in front of him. Ahmad appreciates their consideration. “They’re very caring,” he says.

Ahmad says he would often enter mosques to attend prayers in between military meetings, eliciting all sorts of reactions from the Muslims inside – ranging from surprise to support to mirth. “Sometimes instead of saying ‘Alsalamu alaikom’ and shaking hands, they would start saluting you,” he laughs. “And everyone would nudge the next one that there are soldiers around.”

To this day, he still gets questions from some of his friends about how to go about joining the Defence Forces. In the past decade, he says, two more Muslims have enlisted.

“And at the end of the day, you learn that all human beings are equal.”