Leading from the front on tour in Lebanon 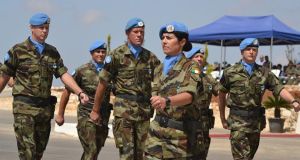 Comdt Lorraine Fahey is one of 18 women serving in Lebanon among the 339 Irish Defence Forces posted there. Photograph: Paul Nichols

Along one of the most heavily mined stretches of land in the world, and with most contentious national boundary on the globe less than 500 metres away, Lieut Ciara Gubbins briefs her troops on their orders for the day.

The 27-year-old from Fermoy, Co Cork, is commander of a 27-strong battalion – all of them men – with the United Nations Interim Force in Lebanon (Unifil). At this isolated posting – the romantically named 6-52 – any rapid reaction force that would be dispatched from the main Irish camp for the other 300 Irish troops in At Tiri, in the event of trouble, is 30 minutes away by road.

“I feel we have very professional and competent soldiers here so we wouldn’t feel more isolated here than the others in the main camp,” she says.

Her platoon conducts area domination patrols to assert its presence and co-ordinate activities with the Lebanese armed forces including counter rocket launching operations, road checkpoints and night patrols. Blue barrels mark the “blue line” international boundary behind which Israeli forces withdrew from Lebanon after the 30-day war in July and August 2006.

The Israelis have erected a fence along the 194km boundary with Lebanon to prevent any incursions into their territory. Much of the fence is electrified. A 30ft-wide lane of sand has been spread by the Israelis all along the blue line. It is checked every day for any footprints or other signs of activity along the fence and raked afresh every 24 hours.

Lookout posts
As the UN erected lookout posts with sparse living quarters for 30-strong platoons on the southern Lebanon side, so too have the Israelis in their country. It leads to a Berlin-wall type scenario, with two sets of troops cheek by jowl, watching each other through binoculars, trying to stay alert in the event the unexpected happens.

Gubbins says she knew when she was just 12 that she wanted a life in the military. She beat off competition from more than 1,000 applicants for one of the 53 places on offer at the cadet school in 2004; the school at the Curragh Camp in Co Kildare where the Defence Forces takes in teenagers and turns them into officers in 21 months.

“I came in straight from Leaving Cert,” she says, the sun beating down as she enters the final fortnight of a six-month peacekeeping tour. “I pretty much decided in first year in secondary school that this is what I wanted to do. I found it really interesting. It’s completely different to any other kind of job you’d have back home in Ireland. Getting overseas was the major concern of mine.

“It’s interesting now being able to serve overseas and seeing things from a humanitarian point of view. It’s my first time away and it has definitely exceeded expectations.”

Her partner is also an officer in the Defence Forces, a factor she says makes overseas duties easier. “It’s probably easier for the person going away because you’re busy all the time and we’d be completely confident in the group of people that the other is working with.”

When asked if the men she leads have had any problems taking orders and direction from a woman who is also younger than many of them, she laughs. “I knew this question would come up. I think females and males are equally as professional and equally as competent, so, as far as I can see, there are definitely no issues.”

There are almost 600 women serving in the 9,500-strong Defence Forces; 18 of them among the 339 Irish troops in Lebanon. The forces were opened to women for the first time as recently as 1980.

While still few in number, the women who spoke to The Irish Times this week in Lebanon believe their career prospects are in no way influenced by gender.

For Cpl Claire O’Connell (29), the blow of being away from home for six months is softened by being on the same tour as fiance Sgt Declan Costello (38). They are both based in Collins Barracks in Cork and are currently part of the mortar platoon survey section in Lebanon.

Target
“If the mortars have to deploy then they need a survey section to give them bearings and angles where the mortars are to aim and fire if, God forbid, we were targeted,” says O’Connell.

She is also a commander of a Mowag armoured personnel carrier used by the Defence Forces to conduct security patrols on all UN missions. The couple – who are together four years – are due to marry on December 30th having met in the Army. However, despite their long-term relationship, they do not serve side by side abroad and do not live in the same quarters.

“We kept it very quiet within the Defence Forces,” O’Connell says of the early days of her relationship with Costello. “We wanted to make sure it was steady and going somewhere because you would get the speculation and jokes [from colleagues].

“This is our fourth mission overseas together, but we don’t share a room or anything. When we volunteered we knew the policies for overseas; you know what is ahead of you. So you’re willing to make sacrifices. You have to respect the fact that other people have wives and husbands and they are at home.”

Cpl Gemma O’Connor is another woman from Collins Barracks in Cork currently serving with Unifil. She was promoted to corporal five years ago and one of her main duties is to assist in training new recruits. On this tour she has worked in an administrative capacity for a company of 108 Irish personnel and has also been part of the patrols the Irish conduct to shore up security and assist the Lebanese armed forces increase their capacity, as per Unifil’s mandate. This is her first trip to Lebanon, but she has been posted to Liberia and Chad previously where she was sometimes part of long-range security patrols lasting up to seven days and reaching into volatile regions.

“Things might be quiet, but it can become hostile on a whim,” she says of the work. “When you come over first and you’re patrolling you very much have your wits about you. And then, as you go on, you try not to let complacency to set it, especially at this time when you’re close to going home.

“These are the times when things could happen. But everyone is drilled to the last; you can be relaxed going out and meeting the locals, but people are switched on for the possibility that something could happen.”

Intense training
From Ballyphehane in south Cork, she joined the Army 11 years ago when she was 17 years and had just completed her Leaving Cert. During the past decade she has also played in eight All-Ireland senior camogie finals for Cork, winning five and picking up seven All Stars in the process.

This year, the intense training in the build-up to her posting in Lebanon meant her sporting career had to be put on hold. “With the economic climate back home . . . the overseas missions can be few and far between. So, obviously, the camogie came into my mind, but I had to take the opportunity to come away.

“It was a big decision. I had it in my head I wanted to go overseas. And you need overseas [service] for some of the things you want to do, like get promoted. I said, ‘look, I want to do this, I want to go’. And maybe I needed a break from playing. It’s no harm. I am looking forward to starting back again next year and it might rekindle the hunger again, you know?” She says of her partner back home: “He knows it’s part of the lifestyle. Your family back home probably don’t want you to go, but it’s part of the job you choose.”

Children
For Comdt Lorraine Fahey and Sgt Paula Quinn, leaving their young children at home while they served abroad was a very pressing consideration.

Quinn, from Newbridge in Co Kildare and based at the nearby Curragh Camp, is part of the medical team in Lebanon. The 31-year-old veteran of tours to Chad and Liberia is part of a crew that mans a Mowag armoured personnel carrier kitted out as an ambulance. It accompanies all security patrols out of the camp.

“We’ve been lucky enough on this trip that we haven’t had to deploy the ambulance. I had to do it in Liberia where we had a medivac situation; where someone needed to be in a hospital as quickly as possible and, thankfully, he survived.”Fahey fills a senior position in charge of running all day-to-day facets of the camp for 500 troops, including Finnish and Belgian contingents working alongside the Irish.

At home she is company commander with the 12th Infantry Battalion in Sarsfield Barracks, Limerick and has previously worked in Kosovo. She sees being away from home as something she has to negotiate as a parent, rather than as a woman. “It’s obviously the same for the men serving here; they have children at home too and it’s the same for their children.”