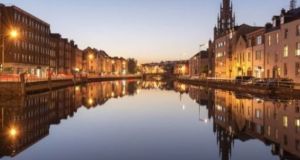 Minister for Local Government Eoghan Murphy has opted not to introduce the proposed boundary change by way of ministerial order.

Minister for Local Government Eoghan Murphy’s intention to begin work on legislation that will mean parts of the Cork County Council area ceded to the city has been welcomed by Lord Mayor of Cork Cllr Tony Fitzgerald.

Mr Fitzgerald said he had received correspondence from Mr Murphy which says he has moved to introduce legislation before the Dáil that would allow for the expansion of Cork city to become a city of more than 200,000 people. The boundary extension would, on this timeline, be enacted early next year.

In his letter, Mr Murphy confirmed that he had moved to progress matters through primary legislation rather than by ministerial order “in view of recent indications that agreement on the part of both local authorities . . . does not appear likely to be achieved”.

The move follows a vote by members of Cork County Council by 28 to five to reject a deal agreed between Cork City chief executive Ann Doherty and Cork County chief executive Tim Lucey for an expansion of the city which see Ballincollig, Cork Airport, Glanmire, Blarney and Tower move from the county to the city.

The agreement between the two chief executives was accepted by an Implementation Oversight Group (IOG) set up by Mr Murphy, but county councillors rejected the deal and offered instead to reopen negotiations to reach agreement which would allow him introduce the changes by ministerial order.

County councillors had received legal advice that Mr Murphy could only introduce the boundary changes by ministerial order if there was agreement between both local authorities and they were hoping this would pave the way for further negotiation on the boundary.

County council sources said they hoped that further negotiation would result in Blarney and Tower staying in the county as many councillors felt that they were being sacrificed in order for the county council to retain Little Island which is a major source of rate revenue.

However, Mr Murphy has opted not to introduce the proposed boundary change by way of ministerial order. Instead he will bring legislation before the Dáil which Cork City Council had proposed and the Lord Mayor has now welcomed the latest development.

“We welcome Minister Murphy’s sense of urgency around progressing the boundary extension. Our focus for 2018 must be on working with the IOG and our county council colleagues to ensure a smooth and efficient transition as there is a significant body of work to be undertaken.”

However, introducing primary legislation in the Dáil to give effect to the boundary changes will require a vote among TDs and several Fianna Fáil TDs from Co Cork have expressed opposition to the Mackinnon Local Government Review which informed the boundary extension proposal.

“These are senseless changes that are nothing less than a power grab by the city council. There is absolutely no democracy in this issue, the people of Cork city and county are not happy with these changes from both sides of the city/county border,” he said.

Mr Collins accused “grey officials in offices” of making decisions that have a detrimental effect on the lives of people in Cork without any real awareness of the impact that such a change would have when local representatives, including many independent councillors, were opposed to such a move.

“It’s another example of democracy being thrown out the window, when you have councillors who work tirelessly for their community like Danny Collins, Kevin Conway, Marcia Dalton, June Murphy and many more who are totally opposed to this destructive extension of the city boundary in Cork.”