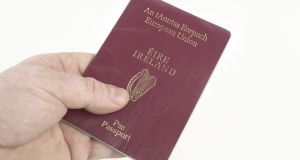 There has been a big increase in Irish passport applications from people living in Britain in the aftermath of the leave result in the UK’s EU membership referendum.

According to the latest figures from the Department of Foreign Affairs, applications for Irish passports from people living in the UK increased by 73 per cent in the month after the Brexit result.

There was also a 63 per cent increase in applications from those living in Northern Ireland. This is compared with the same month last year.

In July, 7,321 people in the UK applied for a passport while in the North there were 6,638 Irish passports requested.

In the June 23rd referendum, the Northern Ireland electorate voted to remain (56 per cent) in the EU but overall the UK voted to leave (52 per cent).

Sinn Féin has repeatedly said the North must not be “dragged out of Europe”. So far the British government has dismissed calls from its representatives and others for a border poll in Irish unity.