‘Lancet’ study reveals conclusive benefits of getting on your bike 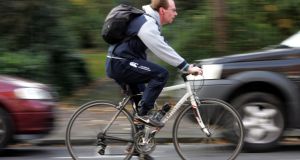 Evidence of activity: Prof Donal O’Shea of Loughlinstown hospital said that at a glance it might seem “stupidly obvious”, but it was important because it “definitively proved” that an over-reliance on cars was bad for the nation’s health. Photograph: Eric Luke

Smug cyclists have yet another reason to pat themselves on the back this morning after a major new report published in the Lancet showed them to be slimmer and likely to live longer than their car-driving counterparts.

Poring over biological data from more than 150,000 people across the UK and studying the wellbeing of half a million others aged between 40 and 69 has allowed scientists to definitively state that getting on your bike or walking to work is simply better for you.

Welcoming the study, endocrinologist and founder of the weight management clinic in Loughlinstown hospital, Prof Donal O’Shea said that at a glance it might seem “stupidly obvious”, but it was important because it “definitively proved” that an over-reliance on cars was bad for the nation’s health.

Even those who use public transport have less body fat than drivers, suggesting that incidental exercise can also make a difference.

Men who cycle to work weigh an average of 5kg less than those who drive while the average woman cyclist weights 4.4kg less than women who commute by car. The link between active commuting and weight was independent of income, area deprivation, urban or rural residence, education, alcohol intake, smoking, general physical activity and overall health and disability.

“The fact that the study seems obvious should not diminish its importance,” Prof O’Shea said. “Were people to take its findings on board it would help in tackling chronic conditions including cancer, dementia and heart disease.”

“I would like to see Irish commuters looking at this study and then looking at how it might apply to them,” Prof O’Shea said. “We are constantly encouraging patients to modify their commuting habits by maybe getting off the Dart or bus a stop early and walking home, or look at cycling.”

Only 19 per cent of primary and 12 per cent of post-primary school children get enough exercise while less than a third of Irish adults meet the guidelines. The most recent national travel survey from the Central Statistics Office found that almost half of those surveyed used their car for journeys of 2km or less while two-thirds drove for journeys of 2-4km.

Study author Dr Ellen Flint said physical inactivity was “one of the leading causes of ill-health and premature mortality”. She suggested that “encouraging public transport and active commuting, especially for those in mid-life when obesity becomes an increasing problem, could be an important part of the global policy response to population-level obesity prevention.”