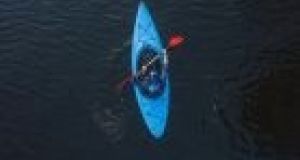 An inquiry into the death of an experienced female kayaker who died on a Kerry river last year has found the lack of a mobile phone at the scene resulted in a 37-minute delay in calling the emergency services. File photograph: Getty

An inquiry into the death of an experienced female kayaker who died on a Kerry river last year has found the lack of a mobile phone at the scene resulted in a 37-minute delay in calling the emergency services.

The woman, Brita Waters, drowned after she became trapped under a log on the Roughty River, Kilgarvan on November 4th, 2018.

The woman was among a group of five experienced kayakers who set out on a downriver run of the Roughty.

A report from the Marine Casualty Investigation Board, published on Wednesday, says the group were aware of a log obstruction and had planned to exit the river before this.

“The fatality was due to the casualty being trapped by a second log underneath the visible log. However, they had planned to exit the river before its location,” it said.

The woman’s kayak touched a rock and capsized as she was turning across the current. “She went out into the main flow of water and did not gain a foothold on the river bed and was washed downstream over the drop into the log obstruction,” the report said.

“Had the log not caught the casualty and the water flow around it pushed her down she would have arrived safely at the pool below the drop.”

The report says the group tried to pull the woman free but the water flow was pushing her down and they tied ropes to her to try and keep her head above water. They also tried to move the log but were unable to do so.

After about 20 minutes one of the kayakers went up to the road about 200 metres away where they obtained a phone from a passer-by and phoned the ambulance service. The only mobile phone with the group was in the pocket of the woman’s buoyancy vest.

The Kenmare Fire Brigade was first on the scene followed by the gardaí. The woman’s buoyancy vest was cut away and she was released from the river and brought ashore. The woman was pronounced dead and a subsequent post-mortem concluded her death was caused by acute cardio-respiratory failure due to drowning.

The Marine Casualty Investigation Board said not all requirements of the Code of Practice for Recreational Craft were adhered to.

“Shore based rescue/recovery personnel were not in attendance and there was no rapid recovery available as per the Code of Practice,” it said.

“A mobile phone or very high frequency radio in a suitable watertight cover was not readily available.”