Krispy Kreme curtails Blanchardstown 24/7 ‘drive thru’ due to complaints

Residents complain over motorists beeping horns at 2.30am in queues for doughnuts 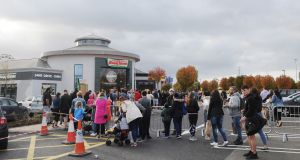 The new Krispy Kreme doughnut outlet in the Blanchardstown Centre is already a victim of its own success.

The store, which only opened last Wednesday, will no longer operate its 24/7 drive thru operation because of multiple complaints from local residents.

The opening of the store was accompanied by a mania not seen before in Ireland in relation to a food outlet. There was a queue of 300 people when it opened its doors at 7am on its first day of operation.

Traffic jams, which resembled the Christmas rush hour, were blamed on customers trying to get access to the Krispy Kreme drive thru last weekend.

Furthermore, local residents were disturbed by customers beeping their horns and disturbing people who lived in nearby apartment complexes.

One resident, Salim Sanehi, recorded footage of cars beeping their horns at 2.30am on Sunday morning.

He posted on his Facebook page: “This is what the people living right next to Krispy Kreme have to deal with now. It’s 2.30am and this sort of noise is what we’ve been dealing with since the grand opening.

“This is still going on and now there seems to be people chanting and egging the cars to keep honking. Krispy Kreme hasn’t done anything about their customers’ behaviour.

“Also for the people saying, ‘Well it’s your fault for living next to the centre’ have you seen the centre at this hour before? It’s a ghost town. This isn’t expected and it should never be expected, there’s literally no defending this sort of behaviour.”

Others have been posting video footage on social media outlets showing long queues in the middle of the night.

The company behind Krispy Kreme has concluded that enough is enough. “We are saying to our neighbours, we’ve listened and we’re making changes immediately,” said Krispy Kreme chief executive Richard Cheshire.

“For the most part too, our drive thru has been a success. But we know that the late-night noise has been an upset for our neighbours.”

The drive thru will be closed with immediate effect between 11.30pm and 6am.

There will be a continuation of the traffic management action plan in the area which has sought to minimise the disruption caused by late night queuing.

Krispy Kreme was founded in North Carolina in 1937. It has 1,300 stores in 31 countries and Blanchardstown is its first Irish outlet.